What doesn’t kill you, destroys you mentally.
--The back of a jacket of someone walking down Lexington Ave.
in front of me.

I want to stop him… ask him what his story is… Is that a fashion statement or did you design it yourself? Are you making excuses? Do you want to warn us? Are you a military veteran? 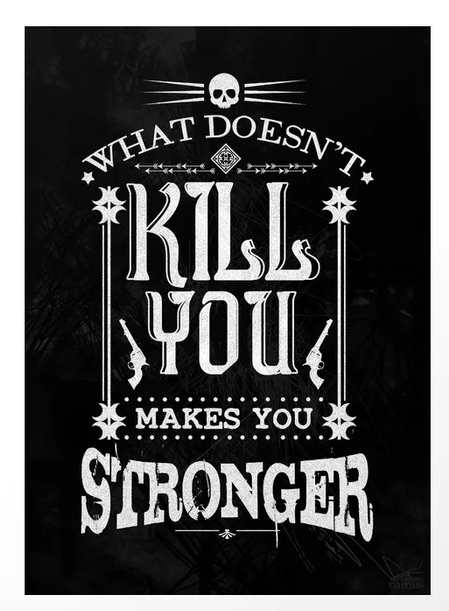 Up to now, the only main clause I knew to complement the subordinate what doesn’t kill you… is makes you stronger. The bullshititude of that is so obvious that it needs no explanation… but I’ll give it to you anyway.
Take diabetes. It debilitates… gradually blinds you, cripples you from the pain on the soles of your feet, maybe an amputation… both legs at the knees. It doesn’t kill you, but it sure as fuck doesn’t make you stronger. Or work… most people survive their worthless jobs: grocery store bagger, stock manipulator, burger flipper, the list of worthless work is a thousand times longer than the one of useful work. Usually it doesn’t kill, but it steals your valuable time… makes you angry, bored, eternally tired… In no way does it make you stronger.

But this guy’s jacket… whoever his is… and he just turned the fuckin’ corner when I wasn’t looking… gone… now I’ll never know… I wonder if he knew the greater idea of his jacket. Since you’re alive, nothing you’ve ever done has killed you. So that means EVERYTHING you’ve ever done destroys you mentally. But wait, there’s more. It’s YOU --not I-- the collective you.. meaning EVERYONE… so EVERYTHING ANYBODY has done contributes to their own mental destruction. Wow… Heavy thoughts.

They look at the laptop screen. The woman points to something and they both laugh. The camera shoots from a low angle a bit off to the right. We see a window behind the couple. They are not looking at it. While the pair laughs, a form appears in window. It takes human shape as it steps closer… a big guy, wearing sweatpants and a RUTGERS t-shirt. Surprisingly easily, he raises the window from the outside and steps into the room.

The big guy reaches into his pocket and pulls out a roll of duct tape. Pulling the twink’s hands behind his back. He holds the wrists together with one hand, while the other hand tapes them. Then the ankles... the mouth… a duct tape gag. Now it’s HER turn.

I unzip my pants and reach in.

The big guy slides down and grabs the woman by the ankles… pulls… her body slowly scrapes down the back of the door… He drags her onto the bed…. next to her duck-taped mate. The camera moves to follow… then cut to a close-up of her struggling, mouth open, silent-- to me with the sound off-- scream… quickly hushed by duct tape wrapped once… twice... around her face... mouth... the back of her head.

This can’t be real, right? There was a camera in the room before the guy broke in. It’s an act… a performance… but they’re so good… so convincing.

The big guy treats the woman like he treated her boyfriend, taping her wrists behind her back and taping her ankles together. She is face-down on the bed. He lies on top of her clothed body and reaches around to undo her wide black belt. He slides the belt off and puts it next to her… then reaching around again, he unbuttons her pants and pulls them down… hard… as far as her taped ankles… She wears slightly baggy women’s panties. Nothing Victoria’s Secret about them. Grabbing the cloth in each hand, the Rutgers man tears it from her body like the villain in a horror move might tear open a closed elevator door to get at the shaking occupants. Her ass is soft… a quivering layer of untoned muscle… slight dimples in the cheeks.

Those cheeks jiggle with each whack of the belt against her naked flesh. Pressing against her back with one hand, the Rutgers boy uses the other to open his own belt… push down his sweat pants. He wears rather unattractive boxers.. gray, with a band that says HANES. Those too the invader pulls down in a single stroke. We get a glimpse of the goods… half hard… soon to be pressed between the untoned cheeks underneath.

Close-up as he pumps himself to full mast. Camera pulls back. We watch him spit… thick white hocker… between the buttocks of the young woman. Close-up: He presses his face between those cheeks… his mouth action is invisible to the camera, but we can guess he’s using his tongue to prepare the tunnel for the traffic to come.

The camera pulls back again. We see the young guy, bug-eyed, watching what’s happening next to him, twisting this way and that… helpless to help his girlfriend. The camera pulled back. This is a movie. These are actors. They are just very convincing actors… It’s not real… It can’t be real.

I pump myself to full mast again and watch as the big guy raises himself and plunges into the woman. She lifts her shoulders… shakes her head… right and left… Close up of her face… her eyes showing terror… a movie scream queen… but more convincing… No, there’s a camera. It can’t be real.

The Rutgers guy pulls out… bending his back and knees showing he’s still hard. He shifts his body… grabbing the young man on the bed… The duct-taped guy twists away. The big guy grabs him by the shoulder, turns him on his back… slaps him hard… one cheek… then the next.

Then, the big guy tears the pretty boy’s shirt… same cross chest motion… rrrrrrip. Buttons fly like mini-bullets. Then the black t-shirt underneath… rrrrrrip! Reaching down, the big guy --somehow he suddenly seems Russian to me… close-cropped hair… light… big square face-- takes each of the other guy’s nipples in his fingers… and twists. The guy on the bed struggles to scream under the duct tape… He raises his head and smashes it against the bed beneath him, as if fighting the pain in his chest. The camera moves in for a close-up… showing a thin stream of drool leaking from behind the tape down the side of the pretty boy’s face.

The guy on the bed ignores the camera… acts like it’s not there… further proof it’s all staged… but his taped face of pain and terror is convincing. I stroke myself faster.

The big guy reaches down and opens the young man’s belt…. tugging on the buckle to whip it through the loops. Then in one big yank, he pulls down the Levis and whatever was underneath. The taped guy’s good parts lay limp between his legs. The Russian reaches to grab the whole kit and caboodle in his right hand. When he gets a good grip, he squeezes.

The tendons on the back of his hand bulge against the skin as he squeezes harder. The taped guy on the bed, twists against the squeezing hand. It looks like he’s going to lose it all... have it ripped from his body… How can he stand that kind of pain? It’s faked, right? It’s a show.

The Russian releases the equipment, and grabs a shoulder to flip the guy onto his stomach. Playing his victim’s ass like bongos, he smashes his hands against those tight white buttcheeks, turning them bright red. The camera pulls back. We see the big Russian kneeling between the guy’s legs. His Russian hard-on as big and solid as a little league baseball bat. This time without saliva lubricant, he plunges in.

The eyes of the young man on the bed bulge harder, like they’re going to leave their sockets. The Russian pumps away. He grabs a handful of the young man’s hair and pulls up… bending the guy’s body into a Nike swoosh.

Another facial close-up. Just the eyes of the guy being fucked. Tears dribble down from those eyes to the duct tape below… every once in awhile the irises disappear and the eyes turn red-lined white. The tears don’t stop.

I’m rubbing myself raw… even rawer… the chafing skin is just this side of bleeding… Oh yeah, it hurts so good.

Here it comes… The Russian pulls out, shifts to kneel right over the young guy’s face. He pumps himself… If only I can wait until he’s ready… Hold it! Hold it! BLAM! Right in those teary eyes. Yes! Yes! A perfect match… He spews. I only dribble.

“Mykel, what the fuck? Why are you telling us this shit?”

“But what’s the point here? To show us how sick you are… how fucked up the internet is… how we can convince ourselves things are fake if they satisfy our own personal pleasure?”

“You’re saying we’re in an age of fake news and we can’t trust what we see even if we enjoy it?”

You believe what you want to believe… and trust those sources that confirm those beliefs. Who knows? And there’s no way to check. I may have been jerking off to an actual rape, but in order to keep my hard-on, I needed to convince myself it was staged.

So you go through life… You divide the world into good and evil and when events don’t match your image… you say they’re fake. But the reality is that the world is complicated, and people (including the President of the United States) are neither good nor evil, but complex beings with complex motives reported in ways that confirm or offend our points of view. It’s ALL fake news. And you wouldn’t have it any other way. 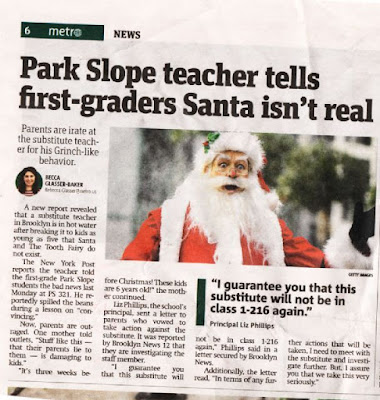 →The Nose Doesn’t Know Dept: Press and government scare mongering has gotten us so skittish that we can evacuate a bus from a deodorant attack. The Huffington Post explains: Thirty students were evacuated from a Florida school bus this week in what the driver reported as a possible “hazardous materials” incident. They were treated on the scene for mild respiratory irritation after smelling a “strong odor.” All were transported to a nearby high school to be picked up by their families.

The odor turned out to be Axe Body Spray, which a student had apparently sprayed liberally on the bus, said Division Chief Mike Williamson. When no one confessed to using the spray, Williamson personally interviewed every student to sniff out the culprit. He said it was the first Axe Body Spray evacuation of his 33-year career.

I read that the search engines like lots of links... and it's also nice to support my friends --and enemies-- in their blogs. So facebook me or email me if you have a blog, webpage or something else to connect to. I add you. You add me.

Let me know if you have a blog… or a PRINT zine and want to be added to the list. You show me yours… you’ve already seen mine. god@mykelboard.com
at January 03, 2020 No comments: