Back To The Future or Mykel's First Blog of 2022

Back To The Future or You're STILL Wrong, Mykel's January 2022 Blog

Living sends a person not into the future, but back into the past to childhood and before birth, finally, to communicate with the dead. --Jeffrey Eugenides
“It's amazing how a little tomorrow can make up for a whole lot of yesterday.” - John Guare
No matter what happens, you always have the past to look forward to. –Mykel Board
“Waaaaa!!!” I scream.
“Fred!” says Mommy. “Look at Mickey! His mask is off… must’ve fallen and we didn’t notice.”
“Mickey!” says Dad, “I’m so sorry. I’ll get you another mask right away.
“Nee wah wet oh dah peep-po she you shmyle!” I say through my tears.
Dad smiles, “That’s right, Mickey. You learn well! Never let other people see you smile!”
“Waaaa!!” I scream again, shaking the stroller side-to-side. “Waaaaa!”
“Okay,” says Dad, “I’ll get a new mask from the DPC (Disease Prevention Center)… next to the lifeguard station. We can’t let little Mickey feel naked.”
FLASH AHEAD 7 YEARS: In school, Mickey has become Michael… years before Michael becomes Mykel:
It’s a big class… 20 of us. I wear dark blue slacks, a white shirt and a bow tie.  We sit at desks... 1 student to 1 small desk…  plexiglass walls between those desks.
Mrs. Hauser… gray dress... white and gray top part… like a bib... stands in front of the room… hands sternly on her hips. She frowns
“Michael Board,” she says. “Please stand up.”
I look around as if it’s not me she’s talking to.
“Stand up!” she says in that special teacher’s voice.
I stand up.
“Now, Michael,” says Mrs. Hauser. “We just got a report from the cafeteria…”
She stops, as if waiting for me to say something… to fill in the blank. I stand stone still… keeping stone quiet.
“You know the problem, don’t you?” asks the teacher.
I shake my head.
“You know where you were standing… on the lunch line… you know how close you were… You were right behind Janet Kaprinski. You could practically touch her!”
I and look behind me at the cute girl... in a frilly yellow dress. She stares straight ahead… like I’m not there.
“How far is six feet?” Mrs. Houser asks me.
I spread my arms as wide as I can.
“No!” says Mrs. Houser, “You are a child. You cannot show six feet with your body. Put on your rubber gloves and touch the glass between your and Robert Gottlieb’s desk.”
I put on my rubber gloves and walk to the partition … touch it.
“Now, walk to the other side of your desk and touch the glass between your desk and Linda McGunnigal’s desk.”
I walk to the other side of my desk and touch the glass.
“That’s six feet!” says the teacher.
I don’t say anything.
“Spread your arms again,” says the teacher.
I do.
“That’s how close you were to Janet Kaprinski,” says Mrs. Hauser. “And Janet Kaprinski is ANOTHER PERSON!” She speaks the last two words in capital letters.
“And what do other people do?” asks the teacher.
I shrug.
“Class?” asks Mrs Houser, “Can you tell Michael what other people do?”
“OTHER PEOPLE MAKE YOU SICK!” shouts the class in unison.
“Again.” commands Mrs. Houser.
“OTHER PEOPLE MAKE YOU SICK!” they shout again… louder this time.
FLASH AHEAD 8 MORE YEARS: I’m making the trip to THE CITY… a Long Island Railroad trip about 45 minutes from Hicksville... masked... of course. I sit in the window seat. My best friend David joins me on this adventure. He sits, socially distant, in the aisle seat.
In this universe, there are cellphones in 1965. I pull mine out and check the time.
“WE SHOULD BE THERE IN 10 MINUTES,” I shout to Dave.
“WHAT?” he asks… both of us mask-muffled in the train.
We pull into Penn Station… get out of the train… leave the platform and look for the INDEPENDENT train line to Greenwich Village. My parents took a trip there once and they said it was where “the weird people hang out.” Sounds right up my young alley.
“Look! Right there! There’s a sign.” 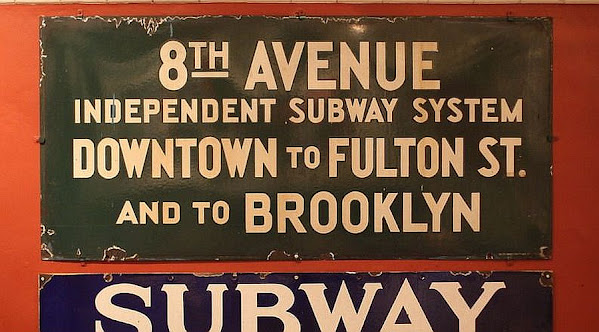 “I think that’s the one we have to take,” I say to David.
“What?” he asks. “I can’t hear you.”
I shout through my mask. “I think that’s the one we have to take to go to Greenwich Village.”
He nods.
We follow the sign to the next sign and finally come to a token booth. Dad has explained the system.
“FOUR TOKENS,” I shout through the booth window. “WE WANT TO GO TO GREENWICH VILLAGE.”
The clerk looks at us from behind his masks. I can see his eyebrows raise in amusement. I make sure I can’t see him smile.
“THAT’LL BE EIGHTY CENTS!” He shouts back to us. “GET OFF AT WEST 4TH STREET.”
I push a dollar under the glass in the booth, and he pushes back four tokens and two dimes. I wave to him... hand two tokens to Dave. We put them in the turnstile slots and walk onto the subway platform.
There is a scream. We look toward the end of the platform. A man is pushing a woman against the wall. He has pulled off her face mask exposing her naked nose and mouth. She opens her mouth to scream again, but the man covers it with his hand… a human mask... forcing her head against the wall.
“Let’s go help her!” says David, taking off for the other end of the platform.
“NO, WAIT!” I shout. “Don’t do it! OTHER PEOPLE MAKE YOU SICK!”
I take out my cellphone and focus it on the couple struggling at the end of the platform. I motion to Dave to do the same.
“Walter Cronkite will pay good money for these pictures. We’ll be on TV!”
“You’re right!” says David, pulling out his own phone and starting to film.
BLAM! FLASH TO WHAT PASSES FOR REALITY IN 2021: Of course, 20 cent tokens and cellphones never occupied the same space-time continuum. And my father would never have rewarded me for avoiding the smile of a stranger.
But people have little else to do during lockdowns and social distancing... they fuck like bunnies and drop a ton of puppies. I have four new nieces, all having come forth from between young legs during the last year.
Those kids will have lives like my fictional childhood. They’ll feel naked without their masks. They’ll be afraid of a stranger’s smile. They’ll see strangers as little more than sources of infection… or fodder for a TV news story. I’ll be dead before they’re young adults.
Lucky me.
See you in hell,
Mykel Board
ENDNOTES: [You can contact me on facebook or by email at mykelboard@gmail.com. Through the post office: send those... er... private DVDs..or music or zines... or anything else (legal only!) to: Mykel Board, POB 137, New York, NY 10012-0003. If you like my writing, you can be notified when anything new is available.  Send me an emailwith SUBSCRIBE in the subject line.  Back blogs and columns are at https://mykelsblog.blogspot.com]
–> Tit for Cat Dept: The NY Post reports that on a Delta Airlines flight from Syracuse to Atlanta, a woman tried to breastfeed her cat. The cat was not happy. Other passengers had mixed feelings.
Flight attendants repeatedly asked the woman to return the yowling cat to its kennel, but she refused. "Her shirt was up and she was trying to get the cat to latch ... and the cat was screaming for its life," said  a flight attendant who was on board during the incident. The woman was taken away by security when the plane landed. It's unclear what happened to her cat.
–>Where’s that Cellphone Camera When You Need It dept: Yahoo News reports that a 98-year-old COVID-19 victim's body was dissected in front of a paying audience in a Portland, Oregon, hotel ballroom.
A funeral director in Baton Rouge said that the body of the man had been donated for “medical research” to a private company called Med Ed Labs.
Instead of research, the body was dissected at a $500-a-ticket event at a Portland Marriott Hotel. The dissection was organized by a group called Death Science, which has more than a million followers on TikTok and says on its website that it educates people on "scientific fields and topics that relate to the deceased."
–> I’m surprised department: How did they let this news out? Almost 5 dozen people suffered blood clots after receiving the Johnson and Johnson COVID vaccine… the majority in women under 50. The CDC revised its recommendations, saying the J&J vaccine should be a last resort. I guess the US will ship the remaining doses to Africa to show how generous we are. Stay tuned for more… and there will be.
See you in hell, redux,
MB