[NOTE: I write this from Japan... soon to leave for The Philippines. I have a lot to say, but my schedule's been so packed, I've had little time to write. I'm uploading this without the help of my usual double proof-readers... and making this MUCH shorter than usual. In the meantime, you might enjoy my travel blog at: mykelsdiary.blogspot.com. That's more friendly-- and detailed-- than this.]

"Believe me, there's nothing like "war crimes" to perk up solidarity. --J. G. Ballard

My NO DRINKING BEFORE NOON rule has flown out the paper-covered window since I got to Japan.

It's the mother of all beer shits... a sake shit, actually. Twin turds, thicker than my forearm... toilet blockers... like giving birth... Holy shit! brown, shaped like giant loose twin pine cones... If I could preserve them, they'd earn a place in MOMA... Art, I tell you... pure Art.

Forty pounds lighter, I push the WARM STREAM button on the toilet arm and wiggle myself to catch the wave. Wiping off the last flecks of yesterday's salmon, octopus, crab, yellowtail, and oceanic things I've never seen or heard of before... I leave the bathroom an extremely happy man.

Akiko sits in the other room, the TV on... something frantic in the voice of the announcer. Her face is in a frown... much different from the usual... Let's get Mykel plastered before breakfast expression I usually see in the morning.

“Have you heard about Paris?” she asks.

“I've been there,” I tell her. “I love the city. Some of the people are assholes, but there are also great people who live there. What do you want to know?”

She tells me there were gunmen... simultaneous attacks... all over Paris... lots of dead...

facebook has already launched a CALL-IN-SAFE page for Paris. They've made one of those stupid SOLIDARITY face masks... like in gay marriage and who knows what else..... as if looking through the French flag changes the reality of the deaths. WE ARE FRANCE? That's so wrong. THEY suffered the pain of the attacks... a French flag over your face helps about as much as a red ribbon helps a dead AIDS victim.

I send out messages... post LET ME KNOW... check on anybody in the world who MIGHT have been in Paris. Then, when there's nothing else I can do... I head out to the Sake breweries.

It's hard to get plastered than it was yesterday.

SECOND THOUGHTS: Hey France! What do you expect? You participate in mass murder... in war on innocents... on bombing and droning... and “coalition” terrorism. You make a war on people. Can you blame them for fighting back? It's a WAR goddamnit! You think it's one way? You attack and that's it? You think you can make war where YOU want? You think there are no consequence? Just pow! pow! pow! Over there!

Listen buster, YOU (and your pals in the US and Germany and England) started this. You expect people NOT to fight back.... to make it easy for you? America-- the country with the least regard for human life.. the country that has killed more people this millennium, than all others combined.... can expect it NOT to get back its own medicinal taste. France, a “coalition” partner... a Middle East terrorist... a Syria bomber... a Muslim killer... What do you expect?

I'm off to meet THE BEAR and MIWA... a trip to Tora-san land. Tora-san is NOT a version of the Hebrew bible, but a famous Japanese TV character... a bumbling salesman who chases after girls all over Japan... visits his favorite sembe shop-- and wears his coat draped over his shoulders. I'm meeting my friends at the Tora-san statue right near the Tora-san museum... in the Tora-san part of town. 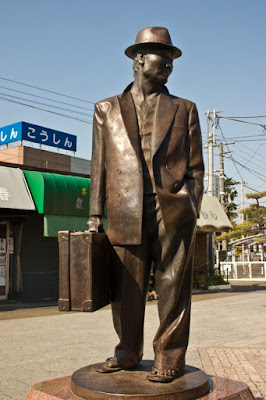 I feel like the first foreigner to enter the enclave... that's the way I like it. You can see more on my adventures there by checking my picasa albums. (If you're interested, send me a note and I'll send you the link, or connect through my facebook page.)

After a great day with Tora-san and my Japanese friends, it's back “home” to check the safety of my French friends. Let's see what CNN has to say.... what the fuck?

It wasn't only Paris that was bombed. More than two score people were killed in Beirut... another big attack in Nigeria. Who knew? Facebook does not offer Nigerian or Lebanese flag coverings for your facebook picture. I guess it's because those people are not white enough... it might clash with the colors.

THIRD THOUGHTS: What the fuck? What did Lebanon do? Who did it hurt? What did it attack? And Nigeria? Fuckin' Nigeria.... the people are as innocent in the world as the US is guilty. Nothing! They've done nothing. Why attack them? It's clear that the US and its allies don't give a shit about “civilian casualties” or dropping drones on weddings... but why should ISIS-- or its allies care about Nigerians? It's crazy... a holy war against... against... I don't know.

Of course the facebook world cares about France... but we can understand fighting France, France is making war. Facebook cares about the U.S. but we can understand fighting the U.S. The U.S. is making war. But those places that facebook DOESN'T care about. Those deaths that are meaningless... not collateral casualties, but distant ignored acts of malice... of murderous death. What the fuck?

And that's where I am now. Stuck in what the fuck? Certainly not ready to come home.