To answer brutality with brutality is to admit to one’s moral and intellectual bankruptcy. --Gandhi

You walk down St. Marks Place… the plan: meet some friends… a drink at the Grass Roots… talk about old times... when St. Marks Place was PUNK ROCK. Barely registering… a city bus pulls over to the curb behind you. You hear it but only as part of the city noise. Then, the running footsteps... behind you… getting closer. You turn. A massive guy… running toward you… eyes filled with hate… like the cuckolded man… on a TV crime-show… running after the man he found boffing his wife.

He gets closer. You put up your hands… show you have no weapon… “let’s talk!” you want to say. No chance...

the crunch of his tight white knuckles into your jaw… a loud CRACK! The rest is pain… then nothing… blackness.

Here’s real scene: Seattle 2021. A white guy… mid-30s… balding, minor beard, slightly on the plump side… stands on a street corner. He wears a black leather jacket. Another guy, about a foot taller, same age, all in white… except for a black backpack. The bigger guy approaches the smaller one… Shouts… it’s hard to hear what he says… The guy in the leather jacket turns… look of fear... puts up his hands.

“I could watch that over and over again… just terrific.”

At least a dozen more of the same tenor... All cheering the aggressor, booing the guy who puts his arms up and just wants to talk.

Oh yeah, the guy in the leather jacket… the one knocked out... was wearing a red armband with a swastika on it.

Did you switch? Were you horrified at the brutality of the aggressor, then turned into his supporter?

A pair of femmy young men walk down Greenwich Avenue from Sixth Avenue toward Christopher Street. They laugh… gesture limp-wristedly... stop and kiss each other in a gay parody of a Gone With The Wind poster.

Comes a voice from behind them. “Hey you faggots!”

Behind them are a gang of New Jersey boys... in town for a little fag bashing. They dive at the legs of the young men as if they’e going to bite them.

From behind the Jersey boys comes a crew with baseball bats. SLAM to the ribs. A Jersey Boy in shorts and a gray hoodie screams and sinks down. SLAM to the knees… a tough jock falls to the sidewalk, wincing in pain.

The bats keep going until the Jerseyites crawl away... back to the Path Train.

When I read about this I think:

The baseball bat group is SMASH, Society to Make America Safe for Homosexuals. Their Modus Operandi is to send out a weak-looking, femmy, pair as bait… and when the pair is attacked… they strike back... harder.

So what’s the difference? How can I defend SMASH but condemn AntiFa? Glad you asked and the answer is easy.

SMASH attacked in defense of others who were physically attacked. The bad guys bashed in real life…. Not supporters… not rumors… not history… not refusing to talk… but right there… watching the attack like you might watch a neighbor beat his dog… and do something to stop it. The anti-fa bashee? He just wanted to talk.

Sid Vicious wore a swastika on the cover of the My Way single. If that were this century, those Anti-Fas would’ve been all over him… probably with a baseball bat.

Your actions give others permission to do the same things. If it’s all right for you to punch someone who thinks differently from you… someone who’s done nothing to you… why not the same for someone who is a different religion from you? Or a different race? Or… the list goes on, but you get it.

You’re building an audience who, when it happens to you, will be saying:

When someone catches you sneaking a burger at McD’s… you know, Meat is Murder… you’ll get what you deserve. When someone texts that you put your hand on some girl’s leg when she was crowd-surfing at the punk show… It’ll be more than a hand on YOUR leg. I’ll be tuning in to YouTube to watch the video.

ENDNOTES: [You can contact me on facebook or by email at mykelboard@gmail.com. Through the post office: send those... er... private DVDs..or music or zines... or anything else (legal only!) to: Mykel Board, POB 137, New York, NY 10012-0003. If you like my writing, you can be notified when anything new is available. Send me an email with SUBSCRIBE in the subject line. Back blogs and columns are at https://mykelsblog.blogspot.com]

–>Even The Governor Dept: Because New York State has reached a 70% vaccine rate, the governor has stopped all recommendations for sidewalk masks and relaxed almost all mask mandates in other places. Despite this, almost half of New Yorkers still mask themselves on the street. Stores and restaurants still ask people to mask up before they go in. And the post office is so confused, they have conflicting signs right next to one another. Why don’t the CDC-loving mask-wearers follow the CDC when they say fuggedaboud those masks? 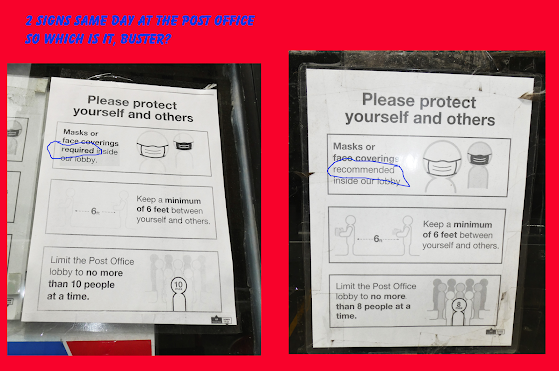 –>Who knew dept: Maybe COVID has turned everything upside down – even the real estate market. The Huffington Post reports on a Colorado house listed as being “a little slice of hell” with “human and animal feces left in the living room to greet you as you walk in.” It sold quickly for more than half a million dollars. I wonder if you have to wear a mask to go look at it.

–>Sudden realization dept: I wish I had the reference. Maybe it was on Al Jazeera, the only TV news I trust. Some professor is talking about race and how what we see on TV and in the news forms our images. She talks about the dead people we see on TV. Bodies of George Floyd and Eric Garner... bodies of war dead. They’re usually black. Remember that guy in Atlanta who killed the Asian sex-workers? How many bodies did you see? Yeah, that’s what I thought. If the victim is white… they show a high school yearbook picture. Asian… no pictures at all.
And hungry people, starving bubble-bellied babies? What color are they? Save the Children? What color children? We know anyone can be hungry… and anyone can be killed, but what we see… what we’re used to… are dead and hungry black and brown people. That’s got to affect the way we think about those people.

Wow! Never thought about that before.


–> Honest Cop Dept: NPR reports The police chief in Sperry, Okla. wrote himself a speeding ticket after a traffic camera caught him speeding. He says he's going to pay the more than $300 ticket he wrote himself. Evidently, he was doing 80mph in a school zone. That’s setting an example. if more cops wrote themselves tickets, you could have police forces that pay for themselves. Defund, shmefund.

–> Just deserts dept: My long-time pal Sid Yiddish found this interesting tidbit. You know how vegans really hate vegetables and are always looking for ways to trick bad-tasting food into tasting like meat? Mock duck, veggie burgers, almond milk. Funnily enough, a veggie company is recalling it’s fake eggs. Why? Because they were contaminated. With what? REAL EGGS, of course. Oh, the horror!

→ Special Thanks dept: And call-out to Josh C. and Grue S. who put me up, and put up with me… during my visit to Philadelphia. Both of the couple are friendly, smart, and large… in the physical and personal sense of the word. I’ve already written about my taste for fat people, their self-confidence and (often) musical ability. When we say someone is BIG-hearted, s/he often is a big person.

One of the weird things I don’t get is… self-image. Do fat people look in the mirror and think I’m ugly?” Do some fat people think… I wouldn’t be ugly if I weren’t fat? Grue is a spectacular AND beautiful woman! AND that fat is… er… a huge chunk of the reason!

See you in hell, redux,