I know of no country in which there is so little independence of mind and real freedom of discussion as in America. --de Tocqueville

What will you do if the people you knew were the plastic that melted, and the chromium too? WHO ARE THE BRAIN POLICE? --Frank Zappa

FLASH TO PORNHUB.COM: Damn it! A search for bisexual Africans is one page long and it only has lesbos with guys. What's up with that? Where is the doggie-style girl on her hands and knees... one guy on either end... the black twinks kissing each other as the girl gives head to one and takes the other up the wazoo? Forward me the links... please!

Bodies crash to the ground. That ground quickly turns to crimson mud. A young woman tries to run from the shots... she trips over a corpse... near corpse?... she's down. Ratatatatat across her back. Two corpses.... Then more. By the time it's over, the body count is 59. 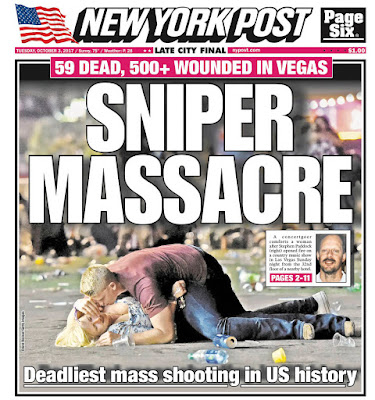 FLASH TO SUTHERLAND SPRINGS, TEXAS: Devin Patrick Kelley enters a church on November 4... He opens fire. Heavy artillery... through the pews... KERPOW! KERPOW! KERPOW! Bullet-torn victims from 24 months to 70 years old.. A sea of bloody Christians... come together to ask for God's blessing and this is what they get. Almost enough to make you think God is not such a nice guy. 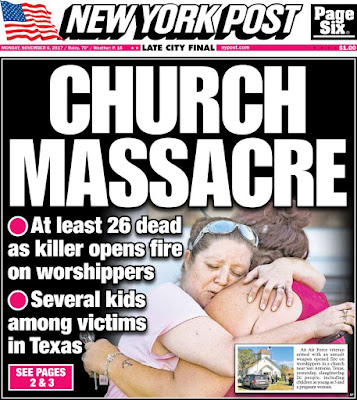 FLASH TO NEW YORK... HALLOWEEN: I hate Halloween. Next to Santacon, it's my least favorite holiday of the year. In NYU-land... around the corner from my apartment, Halloween is an excuse for every closet-queen fratboy to dress in borrowed frills and stuffed brassieres.. and parade his drunken idiocy on the street. It's gotten worse since the costume cops make even this unacceptable (sexist, they say)... limiting approved trans-costumes to Superheroes ... and inanimate objects.

The morning of this Halloween a rented truck in Soho plows into a group of cyclists and pedestrians. The driver shouts ALLAH AKHBAR or something like that. BLAM! Right down the bike path. PITUM! PITUM! PITUM! Like a ball in a bowling alley. Bikes and people fly through the air like bowling pins. Eight people die. 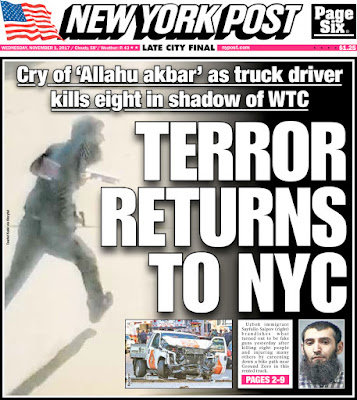 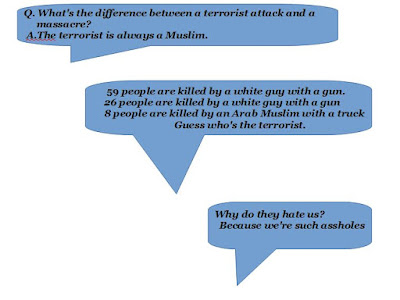 On and on... a tsunami of righteous indignation. When I object, I hear that old 1960s refrain. Mykel, you're either part of the solution or you're part of the problem.

I say: YOU'RE WRONG! The solution IS the problem.

FLASH TO HATE-CRIMES: Somebody scrawls a swastika on a tombstone in a Jewish cemetery. It's A HATE CRIME!! That means the perp goes to jail... for graffiti.

It's a dark side street in Greenwich Village. Two young guys... matching haircuts... walk down the street hand-in-hand. The sound of voices rings from behind.

A gaggle of colored teens is on the homosexuals. A fist to the ribs... one to the head. One of the attackers holds one of the gay pair. Another reaches into the victim's pocket and and takes his wallet.

The colored guys are later arrested and charged with assault and robbery as a hate crime... sentenced to an extra two years in jail... just for the hate part. 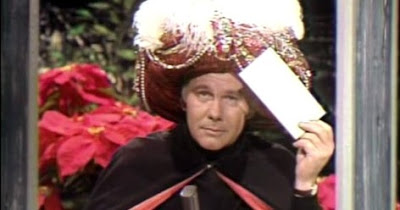 Carson is playing THE GREAT CARNAC! Wearing a huge turban (politically incorrect in the 21st Century) festooned with jewels, he takes a sealed envelope and holds it to his temple.

“And the answer is PETER PAN!” He says. Then he opens the envelope and reads:

“And the answer is Hi Diddly Dee.” And he opens the envelope.

“How do you say Good Morning to your diddly dee?”

Get it? Mind reading was a trick. A joke. Something that everyone knew was fake... an impossibility. That was 1965... Sometimes what everybody knew, nobody knows anymore.

Now, what's IN THE MIND is no longer a joke. It's not a parlor trick. It's a crime! TERRORISM, like a HATE-CRIME is in the mind of the criminal... not in the action. It is a thought crime. Your support for HATE-CRIME laws, makes TERRORISM laws possible. YOU... yeah you... give the okay to criminalize what people are thinking.

What makes the Muslim a terrorist while the white guys aren't? It's the same reasoning that makes a subway graffitier an artist and a swastika painter a hate criminal. It's the MIND.

Don't tell me there are other thought crimes. Crimes of intent. The difference between a killing by accident and MURDER. Intent requires SOMETHING in the mind of the perp... but it doesn't say what that something is. If I plan to kill you... that shows intent. If I stalk you. Follow your comings and goings... wait outside your door for you to show yourself... that shows intent. It doesn't matter WHAT the motive is... jealousy... fear... hatred... revenge... intent is the only requirement. It doesn't take a mind-reader to figure it out.

In the 21st Century, things have changed. Where mind-reading was a joke, now it's deadly serious. People are going to jail... maybe executed... because of their thoughts! Because of what's in their minds.

You're pissed that the white guys massacred and the Arab was a terrorist! The reason is the thought, not the action. Terrorism is for political ends. The THOUGHT must be to make some political change. The massacre-makers had no politics. They were in it for the blood. More people died in the massacres, but the killers didn't THINK terrorist® thoughts.

I've written before about my feelings on hate crimes. Now we see it reflected in terrorism. The same people who support hate crime laws, now complain about “unfair” terrorism charges. You... yeah you... you don't get it. You're the problem.

Once you allow MIND-CRIMES... once you allow the law to prosecute thoughts... what's in the mind... you unleash a terrible power. How many of my fantasies are illegal... and yours? How many women dream about getting raped... but would never want it in real life? What if there were penalties just for the fantasy? How many diaries... blogs... pre-bedtime jerk-offs... daydreams... nightmares are against the law... or will be?

Is my increasing inability to fantasize a reaction to increasing thought control? I donno, but it might be.

When we police thinking... we stop thinking. Americans suffer from lack of thinking enough. My inability to create a hard-on-inducing image from scratch is a precursor to ALL of our inabilities to imagine anything new, different, transgressive, strange.

The cliched answer to Why do they hate is? is: They're jealous of our freedom. As long as THINKING is against the law, we have no freedom to be jealous of.

ENDNOTES: [You can contact me by email at god@mykelboard.com. Through the post office: send those... er... private DVDs..or music or zines... or anything else (legal only!) to: Mykel Board, POB 137, New York, NY 10012-0003. If you like my writing, you can be notified when anything new is available by subscribing to the MYKEL'S READERS Yahoo group readmboard-subscribe@yahoogroups.com

--> I said it in the 80s dept: I found a link to a "song" I wrote in the 1980s that had similar ideas... called "terrorist." You can find it at: https://www.youtube.com/watch?v=LqBBIxBYQ1I, but you might have to cut and paste, because Blogger is acting up today.

-->Scalp em! dept: The Minneapolis Sculpture Garden has dismantled an anti-slavery artwork that tried to recreate the gallows Americans used to help enslave non-white people. Why was it dismantled? Indians!
Protesters said it was traumatic “because it recalled the execution of 38 tribesmen in 1862.” Traumatic? That's the idea! But you can't talk to people about trauma... it may cause a traumatic reaction.

-->Leaving Absurdistan dept: By the time you read this I'll be out of New York on my yearly adventure to... someplace. This year I'm going to:

1.Los Angeles from Dec 1 through the 7th

If you'll be in any of those places let me know... and we can meet up. If you've got beer and a couch, that's even better.

-->Busy little beaver dept: There's lots to pimp this month. First, there's an essay I wrote (actually a version of an MRR column), about GG Allin's last show in New York. The book it's in is expensive, but great! Click on it for more information and Amazon ordering. Maybe you can get it used. 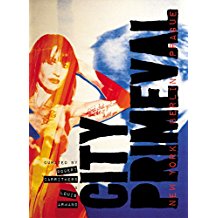 -->Something for the girls dept: I contributed a lot of photos, but they only wanted the ones that presented a “positive image.” So I think I have one picture in the book... even then, it's a fine inspiration and memory of a time when females did more than complain about being touched. 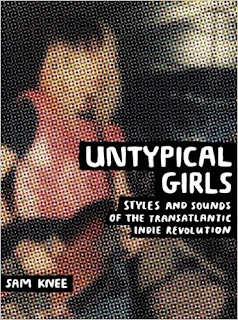 -->You're kidding dept: Those who REALLY know me, know that I'm a fan of haiku and senryu (more human, usually humorous, haiku). I don't mean those idiotic 5-7-5 internet joke haiku. I mean REAL stuff. Stuff that ignores 5-7-5 and goes for something deeper. For 25 years or so, I've belonged to The Spring Street Haiku Group. We do small chapbook anthologies. Here's the current one... and it's cheap. If you can't connect by clicking on the book, it's because I'm out of town. Try again at the end of January, or send a crisp $5 bill to me at POB 137, NYC 10012. I'll send you a copy when I get back. 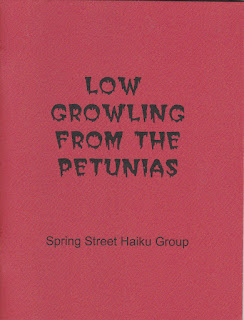 -->Last With A Hard-on dept: Remember when homos celebrated QUEERNESS instead of pushing to be JUST LIKE EVERYONE ELSE? You can see me, Tom Jennings, Larry Livermore, Bruce LaBruce and the terrific GB Jones (among others). In the Queercore documentary... Here's a link to their facebook page. 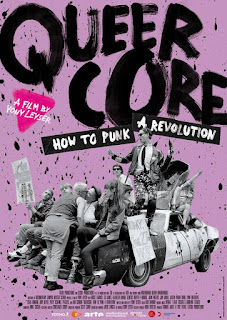 If you're interested in my travel writing , check out http://mykelsdiary.blogspot.com/

You can read some of my classics as far back as the 70s at: http://mykelsoldies.blogspot.com/

I also have some random postings including several on how rich people spend their money.
Those are at: http:/mykelsclippings.blogspot.com

I read that the search engines like lots of links... and it's also nice to support my friends and enemies in their blogs. So facebook me or email me if you have a blog, webpage or something else to connect to.

See you in hell!