The Only Good Thing or Mykel's Post-MRR Blog #28


Imagine a country whose foundation is subjugation... a country where slaves are written into the constitution... officially “3/5 human.”

Imagine a country whose national anthem talks about bombs and rockets... where citizens trust God and not each other.

Imagine a country that holds more of the world's prison population than any other... most of the prisoners descended from slaves... Where jail terms never end... where the right to vote is permanently taken away... your debt to society can never be paid... You are always a slave.

Imagine a country whose people are so stupid that they can't find their neighboring countries on a map... where more people know the names of movie stars than scientists or philosophers... where people have more guns than passports.

Imagine a country where students aren't challenged to think. Where they're warned about “upsetting ideas” and can opt-out of learning. Where “education” has nothing to do with learning, but is only a means to a job where you work to make other people rich.

Imagine a country where the top 1% owns more than the bottom 90%... where huge, greedy corporations pay NO taxes. Where the answer to any violation of corporate interests is to kill people.

Imagine a country that defines “success” as being rich. That exports its love of money around the world, making fetishes of brand names, charging in foreign branches of its stores, a days wages for a cup of coffee... and through advertising and bribery... makes people want to pay it.

Imagine a country where the solution to EVERYTHING is WAR. Instead of looking at problems with a medical metaphor... like a wound that has to be healed... it looks at problems as THE ENEMY that has to be killed. WARS on drugs... Muslims... terrorism... hunger... even a (long ago discarded) WAR ON POVERTY.

Imagine a country that has, in this millennium, killed more people than all other countries on earth... combined. Image a country that continues to kill people, correcting past mistakes in killing people by killing other people.

What benefit could there be to such a pisshole of a country? What right would such a country have to exist? Why should the rest of the world tolerate such a gaping wound in its earthly body? Is there anything that fetid offal has to offer? Can we find one thing that hell-bent-on-world-destruction nation has done to justify its existence?

FLASH TO NOW: I'm in a 777 airplane flying from Manila to New York... via Taiwan. I've been in the plane for seven hours... with another eight to go. I can't sleep, having stupidly taken the aisle seat so there's no window to put my head against. When either of the two passengers next to me needs to take a piss... I gotta get up and move.

Then there was The Philippines. I quote from my travel blog (mykelsdiary.blogspot.com)

Food stands sell Chinese pork buns or wooden sticks with your choice of pig's ear, pig's blood or pig guts. The narrow streets hold the auto exhaust of the immoveable traffic. Walking a block is like smoking a pack of cigarettes.

Every few meters, one young woman or another will smile at you... showing her braces and ask, “Hey Joe, you like me?” If you shake your head, she'll offer you her younger sister... or her daughter. My upper arm still has a bruise where a street hooker pinched me to keep me from walking away. Every few steps bring you to another encounter.

Backpacks become frontpacks here... watch your step...means a fuck of a lot more than be careful crossing the street. The heat is oppressive... a wet-heat. Your sweat mixes with the filth from the car exhausts. Simply scratching your neck leaves your fingernails black.

I love the place.

I've been sleeping on a thin mattress on the floor in Taytay, a Manila suburb. Johnny Deadbrain lives here... with his mother who barely makes a living selling ice to the neighbors out of her refrigerator.


I get the mattress. Johnny sleeps on the other side of the living room... on a cardboard box. 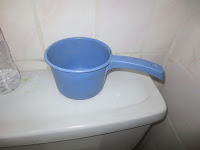 The toilet, as most in this country, doesn't have a seat. You flush it by filling a plastic bucket from a cold water wall spigot and pouring the water into the toilet bowl. A plastic dipper floats in the water. It's not clear whether the dipper is used to scoop water to flush the toilet... or to scoop water to wash your ass in lieu of toilet paper. There is never any toilet paper. Whenever I buy anything in the country, I demand a receipt. That paper comes in handy.

[NOTE: A few places-- mostly high class-- have toilet paper HOLDERS built into the wall. They are for decorative purposes only. There is never any actual toilet paper in them.]

At Johnny's place, the wall spigot is also the shower and bathroom sink.

The Philippines are punk rock.

It's like New York in the 70's... when/where punkrock was born. Dangerous, mysterious, sexy, anarchistic, musical. Everybody and his father... grandfather... is a musician. Even the poorest homes have a turntable... and a collection of records that would make the Rev Norb envious.

Johnny shows me an original of the first Ramones album. From a small speaker attached to his android, comes The Ramones, GG Allin, and his own band DEADBRAINS.

Rock'n'roll came to the Philippines with American servicemen during and after World War II. Navymen wanted more than local nookie from the natives. They wanted their music.

They brought records... 78s... 45s... 33s... to these islands. Local musicians quickly learned the music to play for the sailors. It was as profitable as-- and less painful than-- an American maritime turgid sausage in their anuses.

From the songs learned from those sailors' records, the Philippines developed its own brand of rock... its own bands... its own style. Punk rock came here before anywhere else in Asia except possibly Japan.

That's it! The American contribution... America's ONLY contribution... its only value in the world. ROCK'N'ROLL... That great merging of cultures: black Jazz/Blues that came up the Mississippi River from New Orleans smashing smack dab into white Country music from the heartland. When Hank Williams buggers Muddy Waters... Chuck Berry and Elvis Presley are born.

That freeing, open, rockin music. That rock... that glitter... that punk... that hardcore... That rebellious, liberating, loving, aggressive force. That may be the only real gift America gave to the world... but it's a damn good one.

→ It ain't music, it's a concept dept: Chuck Shephard reports that the group Matmos released their new album, "Ultimate Care II." The LP consists entirely of "music" made by an Ultimate Care II washing machine. The machine's 38-minute wash cycle was "sampled and processed." Matmos previously played canisters of helium on stage at Radio City Music Hall and a cow's uterus at the San Francisco Art Institute.

→ Tax dollars at work dept: One of the many evils of the Obama administration was the bank bailouts and lack of anybody going to the clink for the tragedy. The government claims a victory because it took in billions of dollars in fines from those banks. Same for corporate polluters like BP in the Gulf of Mexico.
Not so fast.
The New York Times reports that the money those banks and corporations paid is considered “tax deductible.” So those same corporations just listed the fines on their tax returns as a “business expense.” They paid no taxes on that money.

→ Bathe in this dept: Brandon Terry and Casey Fowler of Spartanburg South Carolina were arrested after calling 911 five times to report possums jumping out of their refrigerator and microwave, worms emerging from their floor, and midgets in camouflage. They denied any drug use, but police said it was likely "bath salts."

→ Sex & The Serviceman Dept: It probably didn't make the U.S. newspapers, but a Philippine jury convicted a U.S. sailor of murder. He strangled a prostitute and drowned her in the toilet, when he discovered she had... er... extra equipment. The Navy removed the sailor from the country before he could be sentenced. At last report, the prostitute was still dead.

→ Further Evidence Dept: The Daily Mail reports that they've seen video footage that shows Israeli commandos rescuing wounded ISIS fighters from the Syrian warzone, Many of the rescued are enemies of Israel and some may even be fighters for groups affiliated with Al Qaeda. Almost every night, Israeli troops run secret missions to save the lives of Syrian fighters, all of whom are their sworn enemies.
Clearly, toppling Assad is more important to the Israelis than fighting ISIS. No wonder that Israel-obedient Obama calls for REGIME CHANGE in Syria, while the Russians just fight ISIS.

→ Endorsements Dept: Also on the Russian front. The Washington Post reports that Vlad Putin has damn near endorsed Donald Trump for the U.S. presidency. He called The Apprentice star, “the absolute leader in the presidential race.”
In October, Trump said that he would “get along very well” with Putin and applauded the Russian president for his intervention against the Islamic State in Syria.

→Vote Jew Dept: Next year it looks pretty sure I'll be voting for a Jew in November. If, by some (from my mouth to G-d's ears) miracle, Bernie Sanders gets the Democratic nomination... I'm there. If not, I'll have a difficult choice between JILL STEIN on the Green Party, or my pal SID YIDDISH on the Lincoln-Republican party. In any case, I'll be voting Jew in November!

-->Keeping the Pressure on Dept: I want to thank reader George Metesky for suggesting a continuing Bring Back Mykel effort directed at Maximum Rock'n'Roll for censoring me.
As their revolving editrixes move on to commercial ventures, they blame their predecessors for my demise... as if they had no control over the business... and couldn't simply invite me back.
Send your comments to mrr@maximumrocknroll.com (or post on their facebook page) with the subject line: BRING BACK MYKEL! Let me know how they answer.