Pennsylvania is Philadelphia and Pittsburgh with Alabama in between.
--James Carville


I sit at the Midway, a rundown bar in Punxsutawney Pennsylvania. On one side of the sign outside it says: OPEN E ERY DAY, on the other side is WED. NITE WINGS. They haven’t had food of any kind for over a year.

“What’s up with that?” I ask Marcy, the bartendress. [NOTE: I’ve been here a couple of weeks now, and have yet to see a MALE bartender… at any bar.]

$2.25 a beer is EXPENSIVE around here. [NOTE TO READERS WHO DO NOT LIVE IN MASSIVE GENTRIFIED CITIES: average cost of a beer in a Manhattan bar? $8]

I sit next to my pal Vincent. He has a doctorate in economics… used to teach business before the local college decided to become exclusively a culinary school.

Behind the bar, there are two huge TV screens. Bigger than you’d see at any sports bar in New York. On one screen is a hunting show. The bearded millennial compares rifles and crossbows… showing this and that dead deer… picking them up by the antlers and making their dead heads look right, then left.

Before we get to the meat of my bar visit, let’s zoom out… helicopter view…

Punxsutawney PA... famous one day a year, it sinks into depression for the other 364 days. The entire spirit of the town is the groundhog. There are groundhog statues everywhere… in all sizes. There’s groundhog beer, groundhog pizza, and the Weather Museum. The city motto is Weather Capital of The World. Maybe, but surely for only one day a year.

I’m here learning about small town America. What it’s like… what the people are like… how they think… how they live. 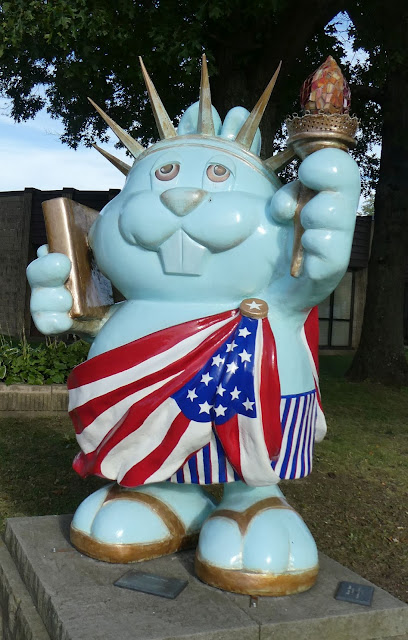 I thought I knew. I thought I grew up in a small town. Hicksville... yeah, that’s really the name of my hometown... has a population of 36,000. One Catholic high school, and one high school for normal people. It’s changed since I lived there… but when I did it was all white. For foreign food, we had Frank’s Alibi (Italian) and Long’s Chinese (later closed down for serving cat meat).

It took 45 minutes to take the train into THE CITY and another 45 minutes to take it back. My father did it every day… I did it on weekends. Some of my friends had cars and girlfriends and rarely left the county. We had a house with three bedrooms, an attic, and a basement.

Up until Punxy, Hicksville was the SMALL TOWN I grew up in. Now I know I didn’t know jack shit about what that is. Hicksville is not a small town. It’s a suburb. A NEW YORK CITY suburb. It’s about as small town as East and West Egg… though much less opulent.

In Punxsutawney in 2019, there is one Jewish family. The nearest synagogue is 20 miles away… and on Yom Kippur there are fewer than 20 people in attendance.

“Punxsutawney is all bars and churches,” my landlady tells me.

I haven’t visited any churches, although some are beautiful… but the bars… that’s where I go to find out about the locals in any non-Muslim location. And believe me, Punxsutawney Pennsylvania is as non-Muslim as The Vatican.

What else can I tell you?

Well, people here are fat. I don’t mean overweight. I don’t mean obese by government standards. I mean HUUUUGE… MONSTER-SIZE… Three airplane seats width… asses from Pittsburgh to Philadelphia… especially the women. There are almost as many motorized wheelchairs as there are cars. It’s hard to know if people need them because

A. They’re too fat for their legs to support.

B. They’re so fat because they use the wheelchairs and never walk.

It doesn’t matter. People here are also kind… amazingly kind. My landlady drives me from one end of town to the other… and to several towns nearby... so I can explore the nooks and crannies of the local culture. Her husband walks with me through the back roads that lead to the train tracks that lead to trails that lead to grown over coke ovens… reclaimed by the woods after decades of non-use… overgrown remnants of richer coal-mining days. 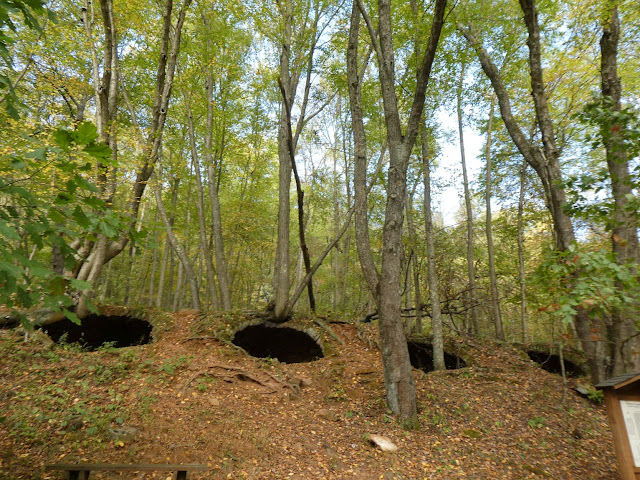 Guys at the bars buy me a drink just to start a conversation. A woman at the historical society drives me to the nearest T-mobile facility… at least 90 miles away… so I can replace my recently deceased cellphone. Why did she drive me? BECAUSE SHE’S NICE… and people here are nice.


They smile and say hi to strangers on the street. Waitresses ask how I am. At the local beer, blues, and BBQ fest, a matronly woman warns me against the sour beer making a sour face. A writers’ group at the library asks me to join them for their monthly meeting. (Note: The quality of the writing among the group members is spectacular.)


FLASH BACK TO THE MIDWAY:

“Mykel,” says Vincent, “I got my bank statement in the mail yesterday. I have ten dollars in the bank. I don’t know what I’m going to do.”

“One of the things you need,” I answer, “credit at the bar and a friend in the police force.”

“There are maybe half a dozen cops in Punxsutawney,” he says,. “They pick up drunks. Who needs ‘em as friends? I need a job.”

“The school here is a small school,” he answers. “The department heads don’t like me. And there’s nowhere else to go.”

The door to the bar opens and a man in his mid-forties comes in. Ruffled blond hair, an unintentional beard, dirty t-shirt, jeans and work boots. People say “Hi Ernest,” as he passes them to sit at the bar.

“I’m in town for a month… doing some research… I’m going to be writing about the town… or at least using the town as a setting for something I’m writing.”

“You have an unfair advantage,” I say. “Tell me about yourself.

He sits down on a barstool on the other side of me from Vincent. Marcy brings him a Bud Lite.

“I used to work in the coal mines,” he says. “I had an accident… cracked my spine… was in the hospital for a month… then almost a year in a wheelchair. After I got through with physical therapy, I got a new job.”

He shakes his head.

“I just like standing on the roof, looking up… the sun, the sky, nothing between me and them.”

“I get it,” I say, “and I love it. New Yorkers would never notice a blue sky. They all walk with their heads down, nose to their iPhones… blocking anyone who really has a place to go… If, by some miracle of awareness, they realized the sky was blue, they wouldn’t look at it. They’d just hold their iPhones up to take a picture.”

“Watcha been doing in town?” he asks me.

“Taking in the sights,” I tell him. “I walked along the back trails and saw the coke ovens… or what’s left of them”

“That’s not fair,” answers Vincent. “That started a long time before Obama… he was just the latest in the move.”

“Let me tell you, Mykel,” says Ernest. “Before Trump I didn’t have a job. After Trump I do have a job. That’s what you’ve got to know. We all thank him for that.”

Yes, this is Trump country. And it’s white… Fox TV-watching… gun-owning America. And the people here are great. Here, like in bars everywhere, they gossip and talk politics. And boy, do I have a fuck of a lot to learn from them.

Can you tell me what the fuck a constitutional crisis means if you have ten dollars in the bank? Can you explain what collusion is if the coal mines… where you and your father and his father worked for years… have gone out of business?

Can you clarify obstruction of justice when the stores on Mahoning St. (the main drag) are empty, and jobs (low-paying, long hours) have started to come back to the city just after the last presidential election?

The locals are not interested in conspiracy theories... on how some Russian Putin agent is hiding under every bed… remote controlling every voting machine… beaming secret signals directly into a receiver embedded in Donald Trump’s hair. They don’t care if Trump paid off a whore… or if his skin looks orange under LED lights. They have closer --more important-- things to worry about.

Back in New York:

Ah, looks like we’re finally going to get rid of that orange guy… impeach… he’s trampling on the Constitution… of course he does… Putin told him to… all roads lead to Putin.

ENDNOTES: [You can contact me on facebook or by email at god@mykelboard.com. Through the post office: send those... er... private DVDs..or music or zines... or anything else (legal only!) to: Mykel Board, POB 137, New York, NY 10012-0003. If you like my writing, you can be notified when anything new is available. Back blogs and columns are at https://mykelsblog.blogspot.com. Subscribe to the MYKEL'S READERS Yahoo group readmboard-subscribe@yahoogroups.com]

-→A shit solution is a good solution dept: Springfield, Missouri authorities have come up with an effective shame campaign to reduce dogshit in the downtown area. Turd piles are being tagged with recycled paper flags saying Is this your turd? 'Cuz that's absurd, and This is a nudge to pick up the fudge. The city says it spends $7,500 a year to pick up 25 pounds of shit per week from downtown parks and parking lots. My question: who weighs that shit?

-->Open your wallet for God dept: CBS news reports that if you have enough bucks, you can buy a pair of Nike Air Max 97s Jesus Shoes from a Brooklyn company called MSCHF. Introduced Oct. 8, the shoes have 60ccs of holy water from the Jordan River injected into the soles so you can literally walk on water.” The shoes also have a crucifix in the laces, red insoles related to “Vatican traditions,” and a Matthew 14:25 inscription. They are also scented with frankincense and are a god-like white and light blue color. The Jesus Shoes originally sold for $1,425, but are now fetching anywhere from $2,000 to upwards of $11,000. No need to buy me a pair. I’m waiting for the Satan Shoes with blood from a virgin in the soles.

Let me know if you have a blog… or a PRINT zine and want to be added to the list. You show me yours… you’ve already seen mine. god@mykelboard.com
at November 02, 2019 No comments: