The Importance of Being Ernestine or You're STILL Wrong, Mykel's February 2022 Blog

The Importance of Being Ernestine
or You're STILL Wrong,
Mykel's February 2022 Blog

The Importance of Being Ernestine
or You're STILL Wrong,
Mykel's February 2022 Blog

Emotionalism, irrationality, softness and weakness are more symptoms of a man's own feminine side than they are characteristics of women.  – Robert A. Johnson
A man does not learn very well. Women, yes, because they are used to bending with whatever wind comes along. A woman, no matter the age, is always learning, always becoming. But a man stops learning at fourteen or so. He shuts it all down. A log is capable of learning more than a man. – Edward P Jones
Old women who go around thinking sensible thoughts should be apprehended with bear traps. – Daniel Kharms
Those who know me know I have a special effect on women. After some time with me, women cut me off like a moyl with a foreskin… no contact with me again… ever… telling my friends to hate me… blocking me on facebook… sending my email directly to the spambox… walking out of any room I walk in to.
Maybe it’d be wrong to say there’s a legion of twatted Mykel-haters, but it would be fair to say there are enough female Mykel-100%-avoiders to arm the Ukrainians for the 21st century.
But wait! There’s more! Women who don’t ditch me like facebook ditches the politically incorrect… become lesbians. It’s my Midas touch. I change them.
My sister, Gayl, says it comes from “the type of girl you like.” She may have a point. I didn’t name the second ARTLESS album Boy With A Cunt because I like handkerchief-dropping, gown-wearing, lip-pouters. 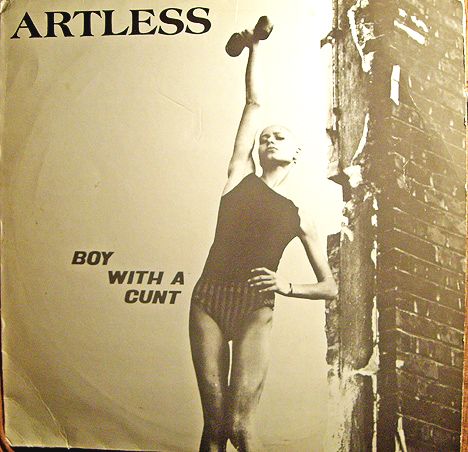 At the start of every day, the women pray. “Blessed be the goddess of all worlds that has not made me a man.” They’ll never know what it’s like.
See you in hell, redux,
MB