YOU'RE STILL WRONG.. MYKEL'S APRIL Vol 2 2020 BLOG OR Who Is That Unmasked Man? by Mykel Board

Who is that masked man?

[I’ve completely given up the idea of splitting the blog into smaller parts. It just doesn’t work well. So now, I’ll just be writing shorter blogs… but more often. Twice a month if I can manage it. This is the second April Blog. I wanted to avoid talking about IT… but these days IT is all there is to talk about]

A castaway in the sea was going down for the third time when he caught sight of a passing ship. Gathering his last strength, he waved frantically and called for help. Someone on board peered at him scornfully and shouted back, "Get a boat!”
―Daniel Quinn,

The police drive into the plaza with a megaphone reminding people to isolate. Then they harass the homeless people that have nowhere to go. It is very weird to see this here in NYC. Do they do this in higher class neighborhoods where people do the same socializing? Redundant question. I know. I wish I had videotaped. --Esneider Huasipungo

It’s just after noon. Time for my afternoon walk to the grocery… post office… the river… someplace to see the city like I’ve never seen it before. I put on my combat boots, trenchcoat, fedora. I do not wear a mask.

Walking down a nearly deserted Bleecker Street. I wave through the window of Cafe Angelique. Elam, the manager and only worker during the plague, waves back.

He gives me the thumbs up. I keep walking… passing several masked people.

[NOTE: from my observation, the majority of masked people –not counting bicycle deliver guys, generally black or Mexican– are white millennial couples… mostly hets. Then, single or paired women. Fewest are people my age… that is, old people.]

On Lafayette Street, Lester stands at his usual corner. He is not wearing a mask. Lester is the directions guy. Every day, he stands by the subway, looking for people Googling a map, or holding a guide book. He knows the subway system up and down. After he gives directions, he asks for spare change. Sometimes he gets it. Today, nobody Googles. No tourists are checking guidebooks.

Usually Lester’s with his friend, a woman about my height, looks about 60… but very wrinkled. I forget her name… maybe I never knew it.

I hand him a dollar… one of a few I keep in my jeans watch pocket for homeless expenses. Lester is not homeless. He has a small room in city housing.

“Thanks,” he says. “Let me tell you about Laura. [Aaaah, that’s her name!] I had to smuggle her. The city shelter where I live said NO MORE GUESTS… SHE’S GOTTA LEAVE. The virus… you know... you know her, Mykel. She’s little. She’s fragile. She couldn’t last a night on the street.”

He walks to the side of me and touches my arm. I flinch… immediately feel ashamed. There are few things that can shame me… but a flinch at the touch of a guy asking for money? I’m not proud of that.

“I hid her,” he tells me, “in a shopping cart. Just put her in and threw in some left over groceries… some cans and bottles… a few cereal boxes… pretended I was coming back from shopping. Smuggled her in. Hid her in the closet when the case-worker came around. She knows how to hide, that girl does.”

I want to kiss him. That kind of love/bravery is something these white millennials with masks don’t get. This guy lives in public housing. If they catch him violating the rules, he’s out on the street. What place… in the midst of a plague… is more fearsome than the street? I don’t kiss him, but I do hand him another dollar.

I turn from Lester and walk uptown. The street is nearly deserted except for a few masked woke folks giving me a wide berth.

Whoa! There’s Dexter. I’ve known him for years. As usual, he stands outside the Korean Deli. We bump fists.

“Up and down when I finish peeing,” he says.

We both laugh… same joke… at least once a week for the last 2 years.

Dexter shakes his head. “I donno Mykel,” he says, as I hand him a dollar. “Look around you. There’s nobody on the street. Usually I make four or five bucks an hour. Today, your dollar is the first bill I got all day. All I got is a few quarters.”

He reaches into his pocket to show me. I hand him another buck.

He laughs… We both laugh.

“Sorry I can’t stay and talk,” I tell him, “I gotta get to CVS to buy some cough drops… It’s this post nasal drip… allergy… everybody thinks it’s CORONA. I’m afraid someone is gonna punch me.”

“Hah!” I say, “If I could afford a personal bodyguard, I’d hire you. But you might have more work than you expect. Some people don’t like me very much.”

He smiles like he gets what I’m talking about. We bump fists again and I head downtown to the CVS on Astor Place.

On the subway, I wonder about Calvin, my homeless friend who sits on a milkcrate outside the Peculier Pub. I’ve known him for almost as long as I’ve known Dexter. He’s got family in South Carolina… like I do. Somehow he visits them every year… I think he hops freight trains. We often talk about how nice people are in the South, and how good the food is.

“Everything except the politics,” I say… I always say… and we both always laugh. I don’t think I’ll get to see Calvin today.

“Hey bud,” he says as I approach, “can you spare something?”

“Sorry,” I tell him. “I gave my last buck to a guy up the street… I may have something when I get out of the store.”

“I’ll take that,” says Random Whiteguy, “I may have something is a hell of a lot better than I usually get.”

I smile, wave at him and go into CVS. A clerk wearing a red t-shirt and a blue mask asks if she can help me.

“Where are the cough drops?” I ask.

She takes a step back, then points, “In the middle of Aisle 4, on the right,” she tells me… and takes another step back.

I thank her. Go to the aisle. No Fisherman’s Friends so I pick up some Halls and go to the cashier. I NEVER do self-checkout. The only time I tried, it accused me of stealing something.

The cashier, wearing a pink mask, sits behind an improvised plastic bank-teller-like window. She rings up the sale and one of her gloved hands takes my twenty-dollar bill.

“Could you give me some singles?” I ask.

She nods and hands me a ten, five singles and some change. I thank her, put the change in my pocket, the ten in my wallet and four of the five singles in my watch pocket. The other single, I keep in my gloveless hand.

I leave the store… there’s Random Whiteguy… approaching the masked NYU students who are breaking their isolation for necessities like bubblegum-flavored vaping tobacco. No one stops for Random Whiteguy.

He recognizes me as I leave. I show him the dollar.

I can’t think of an appropriate ending for the bullshit sentence.

He pretends not to notice.

As I leave Random Whiteguy, some jockish-looking young man is approaching. He walks like King Kong… arms at his side puffed out… each hand in a fist…

“Get a mask!” he shouts at me. “Keep everyone safe. You shouldn’t even be out, let alone spreading corona from street beggars.”

I spin on my heels. Head down like a bull. POW! Headfirst into his chest. He’s down. SMACK… the back of his head hits the sidewalk. I hear a crunch. He’s dazed.

I put a knee on each shoulder and punch his chest. Then point to the homeless white guy.

“I’ll wear a mask when Lester, Dexter, Calvin and that random white guy have masks to wear. I’ll practice social fuckin’ distancing when these guys don’t have to live their lives socially distanced from everyone who passes and sneers ewwww cooties.”

A trickle of blood drips from under his mask onto the sidewalk. I keep smacking away.

“You say your mask keeps everyone safe. You don’t give a shit about everyone. You think your fuckin’ mask will keep YOU safe.” I rip his mask off and spit in his face.

“There’s your safe, asshole! People live on the street and you say STAY HOME. What about them? They ARE home.”

Actually, I don’t do any of that. I just ignore the guy and walk past. I wish I were younger, bigger, with more cajones than I really have. But I’m not.

ENDNOTES: [You can contact me on facebook or by email at god@mykelboard.com. Through the post office: send those... er... private DVDs..or music or zines... or anything else (legal only!) to: Mykel Board, POB 137, New York, NY 10012-0003. If you want to be notified when a new blog is published, send me an email with the subject line SUBSCRIBE BLOG. Back blogs and columns are at https://mykelsblog.blogspot.com. 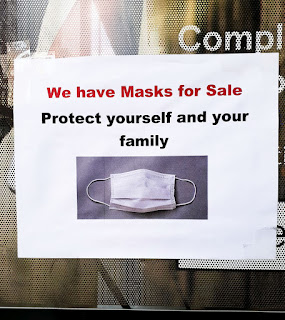 Oh yeah, in case you doubt what I’m saying about the REASONS people wear masks… check out this on the local deli window. And the protectees? YOU AND YOUR FAMILY! It’s not to protect old people like me. Keep everyone safe my ass!
But wait! There's more! How ‘bout this ad from facebook? The height of fashion… no mention of the virus at all… but we all know what it means, right? 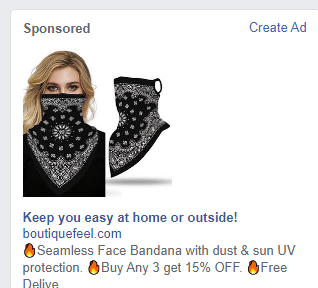 
I read that the search engines like lots of links... and it's also nice to support my friends... and enemies... in their blogs. So facebookme or email me if you have a blog, webpage or something else to connect to. I add you. You add me.