"The more we know about the universe, the more meaningless it appears.” --Steven Weinberg, Nobel Physicist

"What is useful to us generally conflicts with what is true.” --Julian Barnes

Meaning
by Mykel Board


1970-something: If she had a few more teeth, she'd be almost pretty. I forget if it's crack or speed that does it... If I close my eyes... those gums... stroking up and down on my five inches of throbbing flesh... they aren't so bad. When I look at her... that view from the top of her head with the greasy black hair... just-this-side-of-intentional dreadlocks... her nose... light blue veins under translucent skin.. moves back and forth to the beat of her lips

In an objective way... me detached from my body... there... behind CBGBs where the bands load-in... under the faint glow of a spotlight... I watch myself, leaned up against the filthy brick... my own blue veins appearing and disappearing under the nose of the young woman on her knees in the tar in front of me. The veins of her nose are a counterpoint to the veins of my tumescent baby carrot. I can feel her lips... dry... chapped... wet and rewet by her dripping tongue.

My body calls to me... a pulsing seminal call. I answer:

A thin white dribble falls from the side of her mouth.

Five dollars later, I'm around the corner and back inside CBGBs. It's the DEAD BOYS tonight. Just those two intro chords to Sonic Reducer... DAHN DAHAN... send a thrill up my spine that matches anything a crack whore can do.

“Yo Mykel,” comes the voice.

If there's one thing I hate, it's THE READER injecting himself in what I'm writing. I'm not even writing and already THE READER is butting in like a radical at a political rally.

“I'm trying to watch the band,” I tell THE READER. “Can you at least wait until they're done? It's the fuckin' DEAD BOYS!”

“Yo Mykel,” comes the voice again. “You just told a story about a crack whore blow job behind CBGBs. You did it for some reason. It MEANS something...”

“Well then,” comes the reply, “you're saying that sex is just a matter of friction, and it's ridiculous to romanticize it with soft music or poppunk love songs pretending LOVE when all anything is... is sex.”

“Then what does it mean?” comes the rather whiny reply.

Flash to Now: I begin to write this a few days after some guy in Orlando blasts a hundred homosexuals with a semi-automatic machine gun.

News comes dribbing and drabbing. He's a white Christian, on an anti-gay rampage. He's a Muslim. He's a security guard for a company with secret government contracts. He's a soldier for ISIS. He only pledged himself to ISIS minutes before he started firing. He's a homo himself.

On and on. Speculation, pronouncements, false news, half truths... political statements... a circus.

Months before, the FBI's investigated him. They found nothing. There were no charges... an investigation... that's all! But, they investigated him! That's enough for people who want guns banned for “the accused,” whether guilty or not. Forget the idea of innocent until proven guilty. In American in 2016, accused is guilty enough.

Donald Trump and Bill Maher say: IT'S MUSLIM! Look at the Muslims. Evangelicals say IT'S MUSLIM. IT'S GAY... look at GAY MUSLIMS. There's even a preacher who praises the gunman.

“Are you sad that 50 pedophiles were killed today?” sermonizes the pastor of Verity Baptist Church. “Um no, I think that’s great! I think that helps society. I think Orlando, Florida is a little safer tonight.”

Sure, it's pain and horror for those involved, but that's not a reason why it has to MEAN something. More Muslims DON'T kill people than DO kill people. More homosexuals die in car accidents than in nightclubs.

-->Didn't you read the contract dept: In May of this year, the Norwegian Consumer Council staged a live, 32-hour TV broadcast marathon -- a word-for-word reading of the "terms of service" for internet applications Instagram, Spotify and more than two dozen others. This totaled 900 pages and 250,000 words of legal restrictions and conditions. Millions of users "voluntarily" agree to them when they sign up-- usually through a mouse click. A local government official called such terms "bordering on the absurd, as consumers could not possibly understand everything they were legally binding themselves to."
I say, isn't that the idea?

-->Good thing he wasn't a Muslim dept: Convicted murderer Charles Flores was on Texas' death row for more than 16 years (until June 2 of this year) before the state's highest criminal appeals court ruled that the execution might not be justified. Why? The most important evidence was provided by a witness whom the police had hypnotized. The trial judge, and the jury, had accepted that "hypnosis" could lead to "recovered" memory. This was a popular theory in the 1980s and 1990s. It was often used in pedophile and satanism cases. These days, the idea is recognized as bullshit.
There was no physical evidence against Flores. So, for some reason, they didn't kill him... yet. We'll see what happens.

-->She passes on balls dept: Melissa Meija complained that (get this) she was allowed to graduate from High School despite the fact she had failing grades and didn't do her homework. Her teacher said she (the teacher) was put under tremendous pressure by the school to pass the student to boost the school's graduation rate.
If I were the principal, I'd say PASS THAT GIRL, just on honesty.
This whole thing is one of the evil legacies of Billionaire Mayor Michael Bloomberg. He's the one who brought the whole “failing schools” concept to NY education. He should not be given a passing grade.

-->And a touch of good news Dept: I'd guess from the boxing gloves that the Yippies who now run an “underground boxing bar” on Bleecker St. are responsible for this. I also guess they they don't have permission from CBGB to use the logo, so 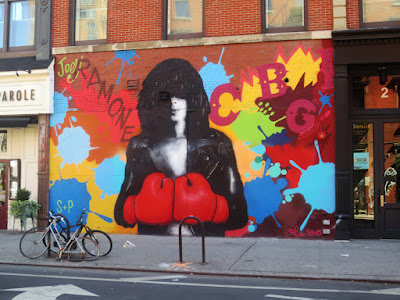 that's why the last B is missing. But I like the mural, and I'm glad to see wall painting praised instead of Giuliani-ed to a prison cell-- with or without hypnosis.