[No punk rock, travel notes or scatology this month. It's an election special.]

Election Special Blog
by Mykel Board

It's all over but the counting. The spectacles... the vote casting... the delegates. It's finished... over. The third act starts now, with the election (if you believe) in November. Each of the two big parties fought an internal war. Each party had an outsider and an insider compete for the nomination. One candidate was the choice of the machine. One was the choice of the disenfranchised... those who felt that they had no voice. In the Republican party, the machine lost. In the Democratic party, it won.

Both sides have called on the party faithful to close ranks... fight the horror that is the other guy... “Vote for me,” says Trump, “to stop the selling of America to the international corporatocracy.”

I like it that Ivanka Trump and Chelsea Clinton are best friends. Their parents have a long history together. I guess most parents of the super-rich have long histories together. I wouldn't know. Bernie Sanders wouldn't know either. But that doesn't affect November.

Me? I'll be voting for Sid Yiddish. I promised him my vote, and he'll get it. As for other Sanders supporters, I want to present the case for voting Trump:

3. Less War Let me get this straight. The US and its allies execute a coup d'etat in Ukraine, overthrowing the democratically elected leader and replacing him with a right-wing dictator. The ethnic Russians in the country fear reprisals from the new regime and ask Russia for help. Russia helps, bringing the Russian section of Ukraine back into Russia, and aiding other ethnic Russians who fear the new dictator. Clinton calls this Russian aid, aggression.

When Gorbachev broke up the Soviet Union in 1991, then-President Bush (remember THAT one?)  promised that NATO would not expand to increase its threat to Russia. In 1999, the Czech Republic, Poland and Hungary joined NATO. In 2004, Estonia, Latvia, Lithuania, Bulgaria, Romania and Slovakia joined. In 2009 it was Albania and Croatia. Russia was surrounded... NATO missiles lie on Russia's doorstep, in violation of the Reagan promise.

In the 60s, John Kennedy threatened to start World War III because Russia put missiles in Cuba... too close to America. So you tell me, what should Russia do?

Trump and Putin seem to have a strong relationship. They respect each other. They don't read ENEMY at every news story. Trump wants to turn down the tension in Europe. Weaken the NATO war machine. Make America less of a global cop. Clinton wants to make the war powers stronger. She's never met a war she didn't like... most notoriously voting for the Iraqi war as a NY Senator.

Every time the US kills innocent people, it makes new terrorists who want to avenge that killing. Every drone Obama has dropped on a Pakistani wedding has made someone mad enough to buy an AK-47. This is not a war, with a central point. There is no one you can assassinate to end it. Obama killed Bin Laden. Did it work?

Trump would not be kind enough, I'm afraid. But Clinton will be worse. She'll send in the troops. You can bet your assault rifle that home-grown terrorists will double under her rule.

4. Stop the Dynasty Listen to the Democrats and it's Hillary this or Hillary that. You don't hear them say Donald, for the other guy Why Hillary? Easy answer: they want you to forget she's a Clinton.

Since Reagan retired into full-senility, there has been a Clinton or Bush in (or near) the White House. A brief respite from BushClintonism came when Secretary of State Clinton quit to start her second run for the presidency. John Kerry took over for a very short time. Otherwise we've had Bush Sr, (4 years) Clinton (8 years), Bush Jr. (8 years) Obama w/Clinton as Secretary of State (4 years). That's about 3 decades of ClintonBushism. The USA has become a 2-family banana republic... with less political choice than REAL banana republics. 300,000,000 people ruled by two families... switching every eight years or so. This is a dynasty supreme. The only way to end it is, well, to end it. Neither a Clinton nor a Bush can do that.

5. Show the Democrats they can't count on the sheep. When Sanders first began his run, some of my friends called him “a sheepdog.” What they meant was that he was being used to shepherd lefties, dissatisfied youth, and other outsiders into the Democratic party-- converting outsiders to insiders. Then, goes the theory, when he loses to the mainstreamer, the sheep will be trapped. They pointed to Eugene McCarthy as an example of another shepherd.

I like Sanders too much to think he intentionally joined this race to be a sheepdog. But between the superdelegates and the recently-revealed party leadership plan to slur him... he didn't have a chance. In order to run, he had to pledge his allegiance to his new party. It may turn out he was a sheepdog after all, but an unintentional one.

6. He'll probably lose anyway Let's face it: the fix is in. Some people think Trump has been a shill from the get-go. They say the Democrats realized they had NOTHING in Clinton. Having no one to vote FOR, they promoted Trump so that people would have someone to vote AGAINST. Nothing motivates like fear.

So fear-mongering runs supreme... vote for Clinton or every colored person will be shot. Vote for Clinton... or the Supreme Court will make it illegal to sneeze without a God Bless You. Trump will start World War Three the minute they make fun of his haircut. (Though it's really more likely that Clinton will start World War Three-- without even a haircut's provocation.) 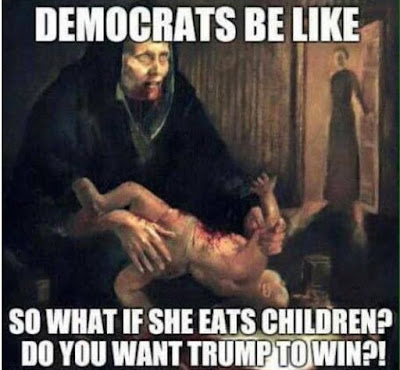 Americans are suckers. “The dumbest people on earth,” to quote Michael Moore. “There's a sucker born every minute,” to quote P.T. Barnum. Even if Trump is not a shill, he still scares so many that non-WASPS shit at the thought of his inauguration. I can't imagine him coming close to winning.

Maybe I'm wrong. It's happened before. But even if Trump wins, it won't be THAT bad. In fact, it'll be better than another Clinton.