The MOST important type of speech to protect is hate speech, because it often contains desperate truths that would lose their urgency if expressed calmly. --Jim Goad

It's my last night in Grenomia... second smallest country in Africa... and one of the many where English is the first language. The natives know half a dozen others. The local tribal language sounds more Slovic than African. I'll do my best to transcribe it. It's been 30 days of wild times with half a dozen citizens who may be the only punk rockers in the country. I have a hangover the size of Lithuania, and a smile on my face the size of Wyoming. Great times!

My farewell party is in a squat on the outskirts of Juancasas.. the country's capital. The locals have squatted the entire house, and when they drive me here they tell me they had a special farewell gift for me. 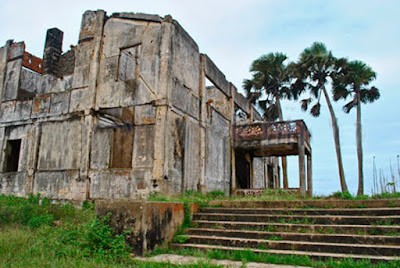 The car pulls over in front of a dilapidated house that wouldn't look out of place in a Psycho remake... Africa version... left over from colonial times and just allowed to rot. It's a tall stone structure with a balcony over the door. The windows are either boarded up or naked and glassless. There is a recently-built front door of sorts... a piece of plywood on hinges.
The lockless front door creaks open, but instead of the theme to The Munsters, Black Flag's Six Pack blasts out from a boombox with fresh batteries. It's the Grenomian Punk House! Oh yeah!

Inside is a self-remodeled house... almost completely plywood. Punk posters on plywood walls... The lower floors have makeshift plywood ceilings while the upper floors are left open to the sky. Clothes hang on wood racks... wood wood wood.

The house is lit with candles. Yep, wood wood wood illuminated with burning tapers... an open invitation to a future skin graft. Fearless me proceeds inward... up a winding staircase... to a closed door that Stratos... my mohawked host... punk and punster supreme... opens with a flourish.   >


“Her name is Ovoje Laž,” Stratos tells me. “You can just call her Ovo. She's your farewell present.”

“Pleased to meet you,” I tell the girl on the floor, now looking over her shoulder at me.

I figure inglizi is English. And she's telling me she doesn't speak it. I figure wrong.

“Just kidding,” she says. “But I got paid. My body is your body. Should we start doggie style?”

“In front of this guy?” I ask, motioning to Stratos.

He laughs again. “Mykel, you've spent your whole life performing in front of other people.”

Faster than a feminist can be offended, I take my clothes off. I'm limper than limp... positively shriveled... how is this gonna work?

When I'm naked, I stand in front of Ovo and she looks at my stub and asks simply, “And?...”

“Yo!” shouts Stratos from the sidelines. “Don't look a gift whore in the mouth.”

She takes my hors d’oeuvre pickle in her mouth. Blood flows to the nether regions. Slowly I perk up. In less than a minute, she releases me.

“Should I keep going?” she asks.

“Have a ball!” shouts Stratos from the sideline.

She takes one, then the other into her mouth. Then both... sucking with just the right degree of gentleness... like a pro.

That makes me harder.

She lets me loose and I go around in back.

I stand behind her. Lower myself slightly... I hear Stratos shift his position... to either get a better view or a better grip.

I bend my knees a bit, reach for the good part and press myself in. I start pumping, but feel very little.

Then she says it... the four most awful words in English:

Is it in yet?It falls out.

I bend my knees more... try again... pffffft... air... I'm fucking air. Insert again... a laughing sound comes from behind me. It's Stratos.

Oh yeah! I salivate and stick my middle finger in my mouth. Then instead of aiming for the i, I am for the DOT on the i. BINGO!

I grab the reigns and buck for the bunghole. Oh yeah! Friction up the wazoo. I watch her ass cheeks wave in punkrock rhythm to the music of my thrusts.

I draw ever closer to that magical moment. All I can do is concentrate on the tightness around my little linguine. Yes! Yes!

I hear a female voice. It is NOT the voice of the girl I'm shtupping.

“YOU KNOW ME, MYKEL,” she says. “I'VE BEEN ABUSED BY YOU FOR DECADES. I'M A LITERARY DEVICE.”

If there were a transcription for the sound eyes make when they roll heavenward, I'd insert it here.

“FINE,” she says, “LET'S START WITH FAKE NEWS. GRENOMIA? THERE'S NO COUNTRY IN AFRICA-- OR IN THE WORLD-- CALLED GRENOMIA. YOU JUST MADE THAT UP.”

“Of course I did,” I answer. “I'm a writer. That's a writer's job... to make stuff up. It's what I'm supposed to do. Is Moby Dick FAKE NEWS because there was no real Captain Ahab?”

“MOBY DICK WAS A NOVEL,” she says. “YOU'RE NOT WRITING A NOVEL. AND BESIDES, THAT'S ONLY THE FIRST OFFENSE.”

“YOU PUT THE WHOLE THING IN AFRICA. YOU'RE APPROPRIATING A FOREIGN CULTURE. YOU'RE INSERTING YOURSELF SOMEWHERE TO CREATE THE IMPRESSION OF THE EXOTIC... THE MYSTERIOUS... YOU'RE MAKING AFRICANS AS SOME SORT OF FREAKS... COMPLETE ALIENS.”

You're wrong! I'm making the Africans punk-cool-sophisticated. That great punster is African. The squat... could have been Ave C in the 80s... is African.

OK, THEN WHAT ABOUT THE HET-ITUDE? THAT WOMAN ON THE FLOOR... IT HAD TO BE A WOMAN? WHAT ARE YOU TRYING TO PROVE, MYKEL? YOUR HETERO MANLINESS?

What the fuck? Are you accusing me of homophobia? Me??? I'm not gay, but MOST of the guys I've fucked are gay. That's as public as my hair transplant.

SEE? YOU'RE EQUATING GAY WITH HAIR TRANSPLANT... AS IF THEY BOTH WERE FAILED SOLUTIONS TO SOME PROBLEM OR OTHER.

DON'T GIVE ME THAT! AND WHAT ABOUT THAT POOR WOMAN?... ON ALL FOURS... IN A SLUM... FOR YOUR PLEASURE. GIVEN LIKE A BIRTHDAY BLOW-UP DOLL FOR YOU TO JERK OFF IN.

It's a service... a job... have you ever given anyone a haircut for his birthday... or paid for someone's cab ride? In a post-work society there will be no prostitutes. No barbers or cab drivers either. Until we get there people work... they have jobs... You think being a whore is somehow more demeaning than being a rich woman's schwarze? I know dozens of people who love whores for what they do. (I'm one of them.) I've yet to meet one who respects the toilet cleaner.

MYKEL! MYKEL! MYKEL! (Literary Device shakes her head.) YOU'RE JUST SO FULL OF HATE! YOU MIGHT AS WELL JUST YELL “FUCK YOU!” AT EVERYONE AND LEAVE IT ALONE.

You're a just literary device... you wouldn't know hate if it came up and bit you on the ass.

BINGO! I WOULD KNOW HATE IF IT BIT ME ON THE ASS. WHAT BETTER WAY TO TELL?

Double bingo! I say. THAT's what hate's all about. A word isn't hate... a cliché... a joke... that isn't hate. Hate is HATE. If I say colored girl... that is not hate. It's just a pair of words with historical meaning. I'll tell you about hate.

I hate mosquitoes. I'd like to kill every one of 'em. I'd like them out... gone... deader than American free speech. That's hate. I hate public displays of possession. Johnny's got Mary (or Jim) pressed up against a lamppost. Their arms are around each other... he grinds his crotch into hers... she sticks her tongue down his throat... one eye on the passers-by... telling 'em Hey look... I'm getting laid. I own this girl... or guy. I hate that! I'd like to strangle them both... bury them as far apart from one another as geography allows.

Want me to tell you what else I hate?

I HAVE THE FEELING YOU WILL ANYWAY.

I hate self-righteous bike riders who think that-- because they don't use gas-- they have the right to go the wrong way on a one-way street, travel at night without a light, and ride on the sidewalk. I hate jock-itch that comes every summer no matter how much I spray beforehand. I hate banks that tell me I need 25-letter passwords and besides they'll block my credit card if I go to Africa... and then say it's for my own protection.

I hate excessive nosehair that-- besides being aesthetically hideous-- tickles when I smile. I hate people who cringe in disgust when I squeeze those nosehairs between my thumb and middle finger and one-by-one yank them out.

ENDNOTES:
> [You can contact me on facebook or by email at god@mykelboard.com Through the post office: send those... er... private DVDs..or music or zines... or anything else (legal only!) to: Mykel Board, POB 137, New York, NY 10012-0003. If you like my writing, you can be notified when anything new is available by subscribing to the MYKEL'S READERS Yahoo group readmboard-subscribe@yahoogroups.com]

-->What's Wayne Newton's First Name? Dept: Chuck Shepherd has collected the names of murderers... or accused murderers-- in the US from 1970 to 2008. Not all of them, though... just the ones whose middle name is WAYNE. You can see the list here. But be prepared... I count six pages of names... from Michael Wayne Adams to Robert Wayne Wyant.
I'm waiting for the Social Justice Warriors to accuse me of Waynophobia. It's not true... there are some good ones out there somewhere. It's just that I can't find any.

-->Jewish Nazis Dept: The totalitarians of the German Antifa Fa squad have shut down a bookstore in Berlin. The reason? The bookstore, located in an immigrant neighborhood, had organized a forum about a thinker than some say is “fascist.” The forum wasn't a promotion, it was a discussion... but discussion is furthest from the “minds” of Antifa-Fas. They called the owner a Nazi and put so much pressure on the store, it had to close. The owners, by the way, were Jews, grandchildren of holocaust survivors.
In their farewell letter they wrote:
when you want a free society you have to except the whole package: the madmen and the pedophiles and the sociopath and the radicals and the dandy and the nerds and the black and the whites and the whiter and the rich jews and the poor christians and also- yourself, this is actually always the right place to start, and it is always best to start now, because tomorrow we might lose these rights and freedoms.

NOTE: If you're interested in my travel blog, you can read it at mykelsdiary.blogspot.com.