Q.
How many feminists does it take to change a lightbulb?
A. That’s not funny
--old joke

Q. How many….
A. You’re defending nazis and racists, how could you do that?
--new joke

If an online discussion (regardless of topic or scope) goes on long enough, sooner or later someone will compare someone or something to Adolf Hitler or his deeds. When a Hitler comparison is made, the thread is finished and whoever made the comparison loses whatever debate is in progress.
--old Godwin’s law

I’m sorry, I was being a nazi when I made my law. Of course, you can compare anything to a nazi and you’ll be right. Excuse my former fascistness. Yes, they're all nazis. Don't hurt me now, okay?
--Godwin’s law, revised by Godwin 2018

It’s funnier than a priest with a woody. Internet cartoons showing Trump and Putin kissing… the Russian bear fucking Donny T up the wazoo… 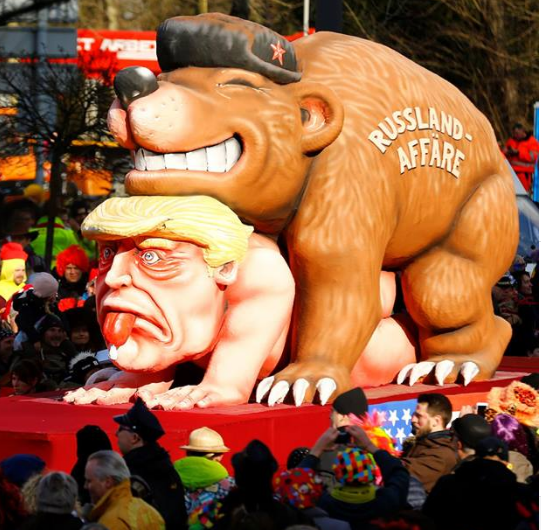 more homo imagery than gaytube.com… How about Trump holding hands with a shirtless Putin? 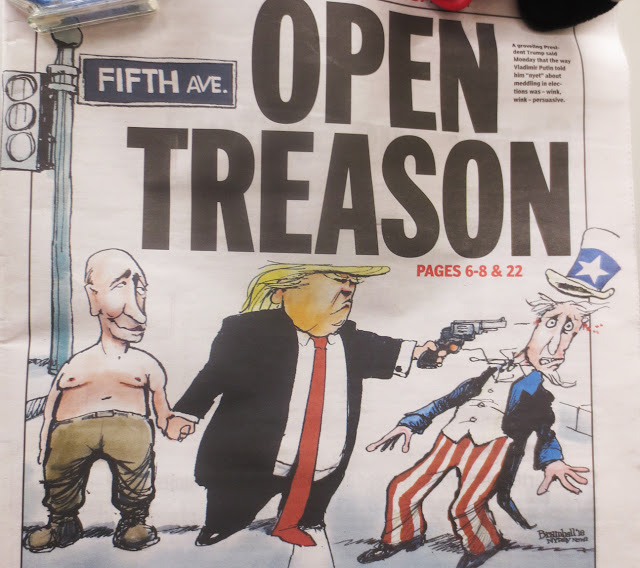 The hidden meaning behind it? Trump and Putin are bad guys doing the nasty… How disgusting, right?.... But funny, right?

So far, I haven’t seen any objection… They love it… even the homos! Ironic that these images-- all reflecting negatively on homotude… are embraced by the same people who champion “gay rights.” I guess everybody knows doing homo things is funny when people you don’t like do them.

Steven Colbert can talk on TV about Trump sucking Putin’s cock… like that’s a bad thing! Oy… maybe it’s the cheese smell... maybe it tastes like caviar... I don’t know… It doesn't make ME laugh. But I AM enjoying the irony, given that Steven Colbert is Mr. Liberal.

Humor and irony used to be good. They were two of the key ingredients in making punkrock… well… punkrock.

Oh no! Advocating child abuse. Lock ‘em up. They couldn’t get away with that in 2018!

Kill the poor? How awful! The poor need our help… our compassion… we should be killing the rich! What’s the matter with you? And Dead Kennedys??? How could you call yourself that? The Kennedys were DEMOCRATS!

Back to the Internet:

From my experience, average facebook users are between 40 and 60 years old... mostly with college degrees. The split is pretty even between men and women. Facebook is also where humor is most lost… and irony just about disappears. (Actually, irony is more present than ever... examples to come. It is the perception and appreciation of irony that has disappeared… rather than the irony itself.) Lately, censorship has incredibly increased on the platform with most of my friends spending time in facebook jail... for facebook crimes and misdemeanors.

The twitter® community has a bit wider age spread, though no less censorship than facebook. Similar irondectomies are performed there... though in shorter messages.

Is it that the middle-agers have lost their sense of humor or that the millenials never had it to start with? The answer is:

Do I even get a laughing emoji in reply? You bet your Antifa I don’t. The answer comes. “Tell that to them when they come for you to take you to the camps, Mykel. To them, you’re just a gay Jew. They don’t get the fine distinctions on the way to the ovens.”

(The old) Godwin would be giggling in his grave... if he were dead.

Bad enough… but the guy who writes this used to write for Maximum Rock’n’Roll! I shit you not. I won’t give you his name because I don’t want to cause him any problems…. and I like him. But I can’t resist the irony in someone who’s known me for 30+ years missing the humor and talking about concentration camps instead.

But wait, there’s more. The irony doesn’t end there.

Donny Trump says he doesn’t trust the CIA to tell him the truth about Russia. Millennials and baby boomers answer by calling Trump a traitor. Some of these are people who-- during the Vietnam War-- were shouting Ho Ho Ho Chi Minh, the NLF is gonna win. And now they’re shouting traitor?

In the 60s and 70s, they rightly hated the murderous lying CIA, FBI and War Department. But now they’re complaining that Trump doesn’t trust those SAME sources of fake information. That’s stand-up comedy material! Too bad they’ll never get the joke. But the irony doesn’t end there.

The demonization of Putin and the unquestioning acceptance of what is said about him in the Western media resemble a kind of mass hysteria. Under closer inspection he will be seen to have brought Chechnya back from the Islamist abyss (where else has this been accomplished?), restored integrity to public services in Russia (with a concomitant rise in life expectancy after the Yeltsin horror years), taught the Georgian psychopath Saakashvili a lesson when he attacked his northern neighbor (yet without shattering the Georgian state in the process as he could have), and helped the government of Syria stave off a jihadist uprising designed to eliminate its multi-confessional nature and reduce it to chaos. And all the while he has had to lead the resistance to the NATO encirclement of Russia that began in the Clinton years and then gathered steam under successive American presidencies, culminating in Obama's coup d'etat in Kiev. It's no wonder that Putin is popular with his people, despite the hardships they have had to endure because of the American sanctions (which the Eurodrones have dutifully followed).

Okay, you can agree or disagree with that, but where’s the humor… or the irony? Well, the writer of that passage is Thomas Yohannon… yep, the brother of Tim Yohannon (RIP) original editor of (you guessed it) Maximum Rock’n’Roll. Here he is, fighting the regressive mainstream left, with some of the same players from 30+ years ago-- but now THOSE PLAYERS are on the same side as the CIA!

In a discussion of Trump and the Russians vs the CIA, someone asks Where’s Lee Harvey Oswald when we need him?

I’m sure you’ve guessed there was no laughing emoji in response. “Conspiracy theory, Mykel. Completely bogus stuff, planted to discredit the CIA.”

The sad part is that the only laughter I hear these days is little kids teasing one another or adults laughing without irony… at “jokes” that aren't funny but, they politically agree with. Trump sucks Putin’s cock. Hahaha, “Trump and Putin… it’s a bromance made in hell.” Hahahaha. “Q. How many Trumps does it take to change a lightbulb? A. Vlad Putin” Hahahahahahahaha.

No. Don’t! Really. I was only kidding. Honestly, it was a joke. Please don’t kill me.

→ Moron Russia Dept: Among the current (2017) Darwin Award winners are a Russian couple. In a tale of Russian intelligence--or lack of it—a millennial pair kicked the bucket while screwing in the back seat of their SUV. With the car located near a beautiful lake, the couple moved to the back seat to… er… make themselves more comfortable. "Located" rather than "parked" because the vehicle transmission was in neutral. The rocking motions of the passengers caused the small SUV to roll into the lake and below the waterline. The 22-year-old man and woman drowned.
For those unfamiliar with the Darwin Awards… they are given annually to people who help clean the gene pool by accidentally killing themselves doing something really stupid.

→ Future Darwin Award Winner? dept: In Teesside, England, 22-year-old Jordan Easton of Thornaby was at the home of a friend, hanging out in the kitchen. He boasted that his vest was "stab-proof." To prove it, he "took hold a knife to demonstrate," testified Karin Welsh, Teesside assistant coroner, "and sadly realized it wasn't the case."
Easton was rushed to the hospital, but did not survive the ordeal. Police found no evidence Easton “intended to harm himself” and only died after "a boisterous act." The official cause of death was recorded as a "misadventure."

→More sad irony dept: During the Vietnam war, Daniel Ellsberg was treated as a hero by those of us who opposed the war. What did he do? He stole the Pentagon Papers, which proved a US Army/CIA conspiracy to cover up US actions in Southeast Asia.
Now, we have Julian Assange… a new Daniel Ellsberg. His Wikileaks have exposed the rigged Democratic primary, how the CIA and Apple colluded, and how the US Army targeted civilians during the Iraqi war. He, too, is a hero.
By the time you read this, he’ll be in jail, extradited from an Ecuador embass His incarceration will likely be cheered by the same people who called Ellsberg a hero. I guess Assange is a traitor. (Oh, the irony!)

I read that the search engines like lots of links... and it's also nice to support my friends... and enemies... in their blogs. So facebook me or email me if you have a blog, webpage or something else to connect to. I add you. You add me.

CONTACT REDUX: You can contact me on facebook or by email at god@mykelboard.com. Through the post office: send those... er... private DVDs..or music or zines... or anything else (legal only!) to: Mykel Board, POB 137, New York, NY 10012-0003. If you like my writing, you can be notified when anything new is available. Subscribe to the MYKEL'S READERS Yahoo group readmboard-subscribe@yahoogroups.com.