Every gun that is made, every warship launched, every rocket fired signifies in the final sense, a theft from those who hunger and are not fed, those who are cold and are not clothed. This world in arms is not spending money alone. It is spending the sweat of its laborers, the genius of its scientists, the hopes of its children. This is not a way of life at all in any true sense. Under the clouds of war, it is humanity hanging on a cross of iron.
― Dwight D. Eisenhower

It's a playground. In back of Lee Avenue Elementary school... just after a rain... Children out for recess.

A boy about 6 years old... his shirt: think horizontal red and black lines ... walks up to a mud puddle... BLAM! Jumps in... spraying mud from here to Timbuck Three... covering his baby Nikes... his school shorts and striped shirt.

In another corner of the playground... a girl slightly younger than the little boy... blond curls... like Goldilocks... walks directly to a puddle... stops just before it... kneels, looks at her reflection... an advertisement for Gerber... until SPLAT... She slaps both hands down into the puddle... the dirt flies... adding mud polka dots to the blue stripes on her oh-too-cute dress.

The older kids are on the basketball court... trying to dribble on the wet concrete. Throwing down a dry ball. It bounces back... now wet. A guy with yogurt colored skin wears a Yankees jersey... weird. This is basketball... and he's wearing a Yankees shirt? You know.. pinstripes... to play basketball?

Anyway, a tall nappy-haired guy from the other team is on the Yankees guy... Fast... the guy with the Yankees shirt throws the ball to a tall freckle-faced kid... red hair. A trail of dirty water follows the airborne ball.. like a tail follows a comet. The tall guy turns on his heel and goes for the redhead. The redhead throws the wet ball to the Yankee. He grabs for it... It skids off his hands... lands smack into a puddle sending a shower of mud up and onto the the Yankee jersey. I knew it would happen.

FLASH: I'm a sociologist... or a journalist... or a politician. Somehow I get the job of analyzing the mud-splashes on the playground. Well, it's clear. What did the splashes have in common? THEY WERE ALL WEARING STRIPES. Conclusion? Stripes attract mud. Solution? Ban stripes from school... stop the mudness.

Hey buckaroo, didn't you miss something. Yeah all the clothes in this case were striped, but maybe other kids got muddied too... and maybe the reason they got muddy was that THEY'RE KIDS! And that's what kids do. Stripes have nothing to do with it. 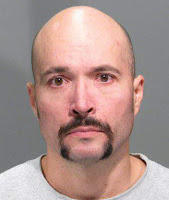 FLASH TO ORLANDO SOME MONDAY IN MAY: John Robert Neumann Jr. walks into his former Orlando company through a rear door. KABLAM! He opens fire, hitting five of his former coworkers... Then he turns the gun on himself. KERPLOW!
Neumann, a veteran honorably discharged from the U.S. Army in 1999, had a “troubled” home life when he was a child, says a close friend.

The Press says it was depression. 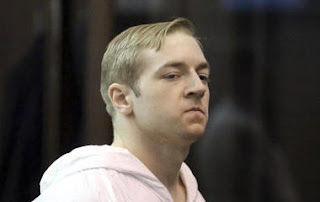 FLASH TO NYC MARCH 27: A white US Army veteran accused of fatally stabbing a 66-year-old black man has been charged with murder as an "act of terrorism" after telling police he was planning a race-based killing spree.
James Jackson, 28, "prowled the streets of New York for three days in search of a black person to assassinate in order to launch a campaign of terrorism against our Manhattan community and the values we celebrate," Manhattan District Attorney Cyrus Vance says.

The Press says it was racism. 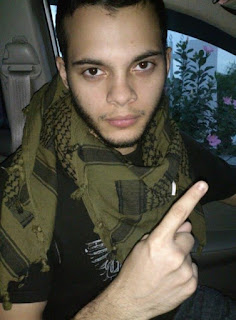 FLASH TO FORT LAUDERDALE January 2017: Esteban Santiago walks into the Fort Lauderdale Airport and kills people... shoots 'em with a handgun. PACHING! PACHING! PACHING!
George Piro, the FBI's special agent in charge in Miami, tells reporters that Santiago was turned over to local authorities and he voluntarily submitted to a mental health evaluation.
"His erratic behavior concerned FBI agents," he says.
The military said Santiago's nine years of service in the National Guard included one 10-month tour of Iraq, where he was awarded a combat action badge.

The press says he was a loony bird. 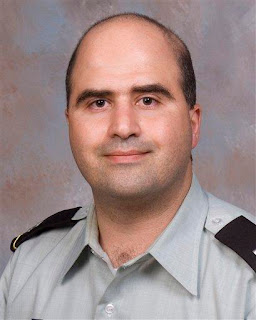 FLASH TO FORT HOOD TEXAS: On Nov. 5, 2009, Maj. Nidal Malik Hasan an army psychologist starts shooting unarmed soldiers. RATTATTTATT! RATTATTATTT! Pfitttt! They scatter... hide under desks... under tables. Score 12 soldiers and one civilian dead. 30 wounded. Prosecutors say one of his motivations was to kill as many soldiers as he could in order to wage jihad on American military personnel. A Senate report calls it “the worst act of terrorism on American soil since the Sept. 11 attacks.”

FLASH TO MAY 29 2017: Memorial Day EVERYWHERE in the US. Who is the memorial for? All those marching firemen, cops... bag pipes, hairy legs under man-skirts.... All those floats... wreaths... politicians.... a parade of marching music... No floats with scantily clad girls... just girlscouts... marching in blue and white... sexy as a toothless meth freak... 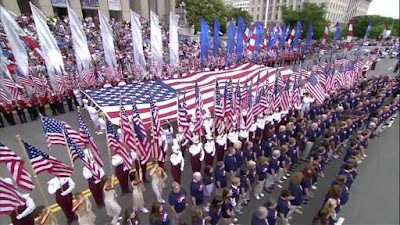 You bet your shattered tibia they're not. The HEROES are the killers themselves! They're the guys BEHIND the guns, not in front of them.

In New York the Heroes of 9/11® are the fire-fighters, the cops, the ambulance drivers who helped people. Not the pilots who flew the planes into those buildings. I suppose, somewhere, they're celebrating those guys... the pilots... as heroes. Yet we look at THEM as Muslims, Al Qaeda, Extremists... not heroes... without seeing that they're all.. uniform or not... officially or not... American or not... KILLERS.

Oh, it's Muslims. It's guns. It's Donald Trump. Like sociologists in a playground, Americans can't see the kids for the stripes. There has been no country this millennium putting less value on human life (except if it's unborn), than the US. Every president (except Jimmy Carter-- my favorite) wants his own war. Commander-in-chief doesn't mean commander of healthcare and chief of wealth redistribution... it means killing people! America's answer to EVERYTHING is KILL PEOPLE.

In the newest Godzilla movie, when Godzilla attacks, the Japanese diplomats want to use liquid nitrogen to freeze the monster and send him back to the oceans? The Americans? Nuke 'im! That's how the world sees us, and the world is right.

For Americans... EVERYTHING is war. There's a WAR ON POVERTY, a WAR ON DRUGS, WAR ON TERROR, CLASS WAR, GENDER WAR, RACE WAR, WAR ON BAD HAIR... War is the metaphor for everything.

I start my day losing the war on sleep. My overfilled bladder wakes me up, and I run to fight the war on last-night's beer. After coffee, the beer war continues... splashing brown rockets into the toilet.

The war on shoe-leather gets me to the train station. On leaving the train, the war on rudeness makes me shoulder my way through the enemy fighting to enter the car before I've left it. Finally, I'm at school, fighting the war on bad-English by teaching my students that the whom and shall they learned in Japan are casualties of that war.

For lunch, I fight the war on my wallet, buying halal chicken-over-rice for $5 and eating it in the park... occasionally fighting the war on mosquitoes. When the day's over, I go home and fight the war on sleeplessness with the rhythmic pump-action machine gun of xvideos.com.

Fat chance that's gonna happen. Instead, when the next Muslim brings to the West a taste of the terror Middle East citizens feel every day... When a great equalizer makes life in London, Paris or New York feel like Kabul, Gaza or Mosul ... it'll be because he's a Muslim. When the next veteran open fires in a Florida nightclub it's because he's a homophobe. When Donny Trump nukes Pyongyang, it's because he has little hands. When I go to Yankee stadium and everyone stands up and applauds a uniformed military woman, it's because she's been defending America-- or my freedom.

Listen buckaroos, the ACLU has done more to defend my freedom than any hundred gals with bazookas. Unions have protected Americans more than any hundred cops with guns. As long as we keep killers as heroes, there sure as fuck will be more of them.

--> Cultural Appropriation dept: A tortilla shop in Portland was forced to shut down because the two white women who owned it learned how to make their tortillas in Mexico. The local ethnic purity cops complained that the pair had “culturally appropriated” the recipes from Mexico and had no right to use them for their own profit.
Next: I'm going to shut down those goyish Southern Court houses who have culturally appropriated OUR ten-commandments for their own judicial propaganda. And, I heard, the Japanese will be suing for use of microwaves, DVDs and animated characters with big eyes.

-->Windows Up Means Enclosed Dept: Harry Kraemer is the 76 year old owner of Sparkles Cleaning Service in London Ontario. He was alone in his SUV recently and decided to light up a cigarette. Smoke-Free Ontario® officers saw this and ran to give him a ticket. Why? Since his vehicle was registered to his business, and the windows were up, the van was an "enclosed workspace."

-->But was he a veteran? dept: Jose Chacon, 39, was arrested in Florida after allegedly fatally shooting an acquaintance who laughed at Chacon's first shot attempt. That time the gun failed to fire. He taunted Jose to try again. He did. The second time, it worked.

-->Keeping the pressure on dept: I want to thank reader George Metesky for suggesting a Bring Back Mykel concerted effort directed at Maximum Rock'n'Roll. He forwarded me an answer to a letter MRR printed where the editors excuse my firing not as censorship for content, but because I “refuse to answer letters in the letters section.”
That's a lie.
In any case, please send comments to mrr@maximumrocknroll.com with the subject line: BRING BACK MYKEL. Let me know how they answer.
MRR also has a facebook Page. You might want to let them know how you feel.

If you're interested in my travel writing (not updated recently) check out http://mykelsdiary.blogspot.com/

You can read some of my classics as far back as the 70s at: http://mykelsoldies.blogspot.com/

I also have some random postings including several on how rich people spend their money. Those are at: http:/mykelsclippings.blogspot.com

See you in hell!

That's a Crazy Idea, Let's Talk About It or You're STILL Wrong August 2022 Blog

That's a Crazy Idea, Let's Talk About It or You're STILL Wrong, Mykel's August 2022 Blog by Mykel Board We live in a te...